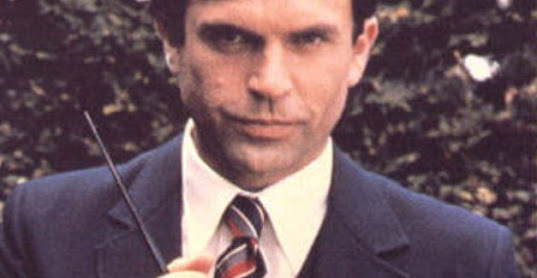 So far, as part of this year's "Halloween Day by Day" franchise days, I've reviewed "The Omen" (original and the remake), and "Damien: The Omen II".  This week, I tackle, "The Omen III: The Final Conflict"...

Damien Thorn is grown up and appointed as the US Ambassador to Great Britian.  When an astronomical alignment occurs, Thorn realizes the time of The Second Coming is upon him, and he puts plans into operation to prevent it from happening.  Soon, Thorn and a group of priests are in a confrontation that will lead to mankind's destiny resting in the balance...

"Omen III: The Final Conflict" isn't  a bad movie.  I wouldn't say that it's a classic, but there are some things that I really liked.

The story is fairly solid, and well paced.  It gives all the characters a chance to be developed, and play a significant role in the events taking place.  Very few of the characters are filler.  Damien, Harvey Dean, Kate Reynolds and Father DeCarol all well formed, unique characters that were quite believable as people.  The only flaw to it is that it's not the rapid, in your face sort of story that appeals to much of the mainstream theatre audience these days.

The acting was good- with Sam Neil doing a terrific job as Damien.  He looked great in the role, and brought such charm and evil to the character.  Lisa Harrow as Reynolds was good as well- her portrayal of her character helped to make me care about what happened to her.

The camera work is plain and simple, but quite effective at times.  Like the story though, the camera edits are slower paced than what you'd find in most of the movies produced lately.

My most serious problem with this movie was the portrayal of The Second Coming at the end.  I was disappointed that they used a rather stereotypical image of Christ, rather than something a little more original.  I felt that they had simply taken his image from a painting and used that.  I also felt that the Scripture text at the end was unnecessary as well, and gave the movie a bit of a preachy overtone, which turned me off a little.

While I DID enjoy watching "Omen III: The Final Conflict," the ending and its execution causes me to put it in "The Bad".