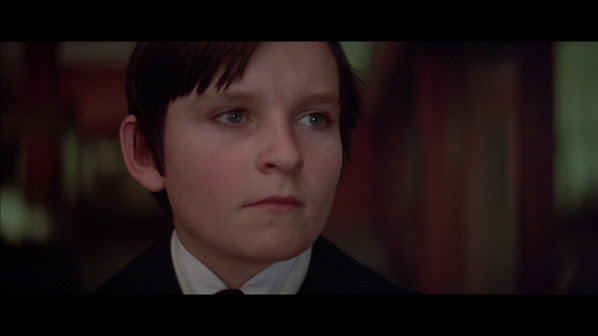 Seven years after the deaths of his parents, Damien Thorn is staying with his uncle and aunt.  He lives a safe, happy life until people start dying.  Soon, Damien learns the truth: that he'll play a major role in the battle between good and evil

The storyline is pretty good in this movie.  It was fairly easy to follow, with enough side stories to provide depth to the main plot.  The pacing of the story in this movie is also a little faster than in "The Omen," so I wasn't bored with it.  There is a serious flaw though with the storyline, and that's the fact that it relies on people having watched the first movie to understand a bit more about the plot.  On it's own, the story isn't as effective.

The story was certainly strong enough to allow for decent development of the characters.  Even though the movie is mostly about Damien, the supporting characters were equally interesting.  I really liked how they weren't just stereotypical characters too.  Each character was unique with a distinct personality.  I also really liked how the evil in the "bad guys" was subtle, rather than in your face and obvious.  Even though I suspected a couple of them, their characters were human enough to surprise me a bit.  The relationships between the characters really added to the intrest factor of the story.  The relationship between Damien and his cousin Mark is a good example of an interesting relationship that sets up certain events nicely.  The interactions between Richard Thorn and Dr. Charles Warren is another good one that really helped to propel the story forward.

"Damien: Omen II" had a great cast.  William Holden as Richard Thorn was fantastic, bringing a reality and humanity to his character.  I also really enjoyed Jonathan Scott-Tayler in the role as Damien Thorn.  He looked great in the role- bringing a sense of charm and sinister potential to his performance.  The tone of his voice added an extra layer of personality to Damien as well.  It was a joy to watch Sylvia Sidney bring Aunt Marion to life as well- I've always enjoyed her acting.  The only actor I had a problem with was Lee Grant as Ann Thorn.  She looked good, but her acting was a little too stage theatre for me.

There is also some really good camera work in this movie- simple but effective.  There's energy and motion and artistry to the sequences and shots.  You could take quite a few of the shots from the movie, and compile a decent comic version from the stills.

As I said before, the requirement of having some knowledge of  "The Omen," weakens the strength of this movie as a stand alone experience.  Because of this, "Damien: Omen II" is best watched as part of an "Omen" movie marathon, and is being placed in "The Bad".