In this day and age, it seems that we're destined to be flooded with an endless deluge of remakes, reboots, re-imaginings and even rehashes of classic movies- including conversions of old TV shows into movies.  I have noticed however, that the horror genre seems to be suffering the heaviest torrents of re-visitations.  With that realization, I'll be doing a "double bill" today... 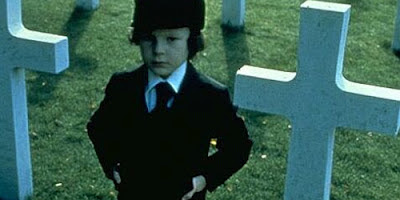 Let's start with the 1976 release of "The Omen", shall we?  The premise is interesting and simple enough to provide potential directions for storytelling:

A prominent politician's pregnant wife suffers a loss when the son dies shortly after birth.  Before she can find out, the politician agrees to substitute a newborn orphan for his own... Too bad that the son is the spawn of Satan...

The acting is a little lifeless at moments, but in general was pretty good.  I enjoyed Gregory Peck as Robert Thorn- the politician, and Lee Remick as his wife was nice to look at, though her acting was a little off at times.  I really enjoyed David Warner as the photographer, Keith Jennings.  We was sleazy, lively and sardonic- an interesting character.  I actually found his character a little more interesting than the somewhat stilted politician.  Patrick Troughton as Father Brennan was fantastic, I thought.  Harvey Stephens was an excellent choice for the role of Damien Thorn- Satan's spawn.  He had the cute, angelic, and charming face of a sweet kid, while giving us a sense of the evil waiting to blossom in later years.

There is some decent scenes in this movie.  The scene where the politician and his wife are taking Damien to church was good, the way Damien started to huff and huff, then go ape shit was well done and energetic.  I also really liked the scene where Father Brennan meets with Robert Thorn to warn him... just before the priest dies- just a fantastic scene.  Another great scene is where Keith Jennings gets decapitated.  The camera work is simple, but effective- as were the special effects used.  The only scene I really had any problems with was the one in the abandoned graveyard when Thorn and Jennings are seeking the grave of Damien's biological mother.  I just couldn't get over how much like a set it looked.  It looked artificial, and I couldn't help be disappointed in it- even though the acting set the mood, etc well.

This movie isn't super fast paced, but once things start to happen at Damien's birthday party (the montage just before it was nicely done), there is a constant sense of tension and apprehension that really made me engaged by the story and characters.  I would definitely sit down and watch this on more than one occaision.  I'm going to place this release of "The Omen" in "The Good". 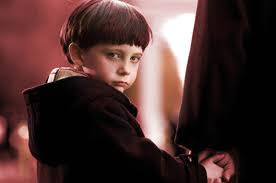 So, now we move onto the 2006 remake.  I was interested in seeing what new stuff the makers could bring to the franchise in terms of concepts, character points, etc.  Sadly to say, I was a little disappointed.

This is a very slick production in terms of visuals, but beyond that, it falls a little flat.  I copies the original in many regards- including at some points almost verbatim dialogue.  There are some minor changes, but they're too few to really make you see this as an original look at the source material.  Most of the changes are simply cosmetic- the decapitation scene being a good example.  The method was changed, and looks great, but lacks any real storytelling punch due to the rest of the movie moving almost beat for beat the same as the original.  Unlike the original, the remake lacks the sense of constant tension and impending dread that is needed in a slow paced story like this.

I honestly didn't like Liev Schreiber as Robert Thorn.  I found the character and the acting to be a little fake and shallow.  Julia Styles as Katherine Thorn wasn't bad, but not great.  To be perfectly honest, I found the supporting characters more interesting and better acted than the main characters.  David Thewlis wasn't bad as Keith Jennings, and Michael Gambon as the archeologist Bugenhagen was great.  I loved the scene where the two characters meet, because of the look the two exchange.  It was as if the two actors were a little surprised to see each other, since they both star in the Harry Potter movies too (Thewlis plays Remus Lupin, while Gambon plays the second Dumbledore).  It was nice to see Mia Farrow as the nanny, Mrs. Baylock.  No stranger to horror movies, Farrow brought a nice sense of sinister intent to the character.  I also thought that Pete Postlethwaite's turn as Father Brennan was fantastic- his face brought a lot of emotion and depth to his character.  The actor who portrays Damien- Seamus Davey-Fitzpatrick, wasn't bad, but lacked the contrast of looking sweet and innocent while harboring a dark evil.  Just looking and listening to him, you KNOW he's evil incarnate.  He was good at creeping me out though.

Even though it's a slick looking production, with great performances by the supporting cast, the lack of any emotional connection to the leading characters and an almost identical copying of the original movie, I don't feel any great desire to sit down and re-watch this anytime soon.  I would recommend it for at least ONE viewing, just so people can see great performances by Mia Farrow and Pete Postlethwaite.  Those two great performers though aren't enough to keep me from placing the 2006 release of "The Omen" in "The Ugly"