Review: On the Trail of Hauntings Ep. 3 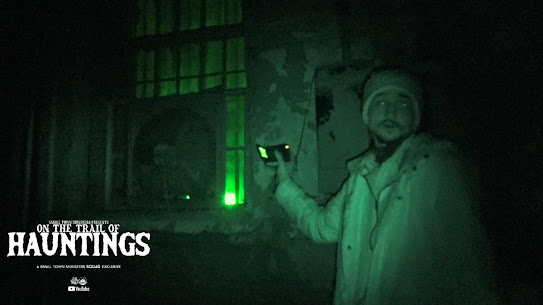 In this latest installment of Small Town Monsters' new web series, On the Trail of Hauntings, we're taken to the Ohio State Reformatory, which is alleged to be one of the more haunted sites in the United States. And, as one would expect given the first two episodes in this series, not a heck of a lot happens.

Fans of paranormal reality shows might be disappointed but, if you've ever been on a paranormal investigation, you know this is par for the course. And it's Seth Breedlove and company's insistence on NOT playing things up for the camera that keeps this show interesting for me.

Indeed, one of my favourite sequences in this episode is when the STM Squad spends several minutes of screen time figuring out what's responsible for a loud, mysterious banging in one of the reformatory's rooms. They end up explaining it away as a natural occurrence, and I appreciate their willingness to keep it all on the screen. THAT is what real ghost hunting is all about.

The team is having more and more fun with these episodes, going so far as to create a Morgan Freeman style narration a la Shawshank Redemption, which threw me at first, but I came to enjoy as the episode went on. The humour might not be for everyone though.

All in all, this was another interesting episode. I'm looking forward to Small Town Monsters return to their more polished documentaries, but will continue to enjoy these side ventures as well. A Good.