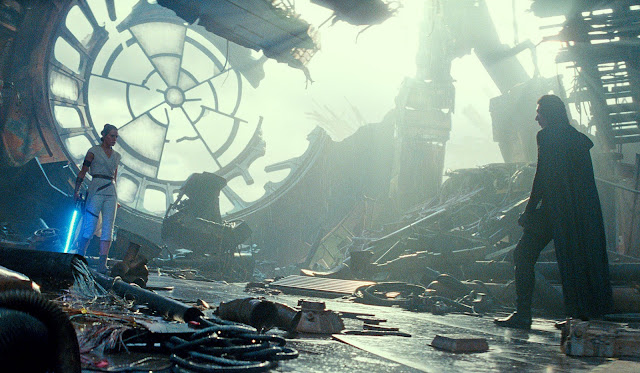 My wife and I have a Christmas tradition, which is we go see a new Star Wars movie together on the years one is released. We wait a week or so to avoid the craziness that comes with a new entry in the franchise, and have yet to be disappointed. That's right, we liked Star Wars: The Rise of Skywalker!

I admit, I was a little leery about this one, as critics and fans have been less than enthusiastic. And the film does get off to a bumpy start, with a shaky first act and far too much exposition early on. Then things settle into the story, and the fun begins.

Sure, a lot of the humour doesn't work, and for a good chunk of the running time The Rise of Skywalker plays like any other decent Hollywood blockbuster. It's got the action, the spectacle and it's entertaining. That's all great, but it didn't feel like Star Wars.

Then something happens toward the end of the second act... something I didn't expect... and The Rise of Skywalker became a Star Wars movie again. I was caught off guard, and I was hooked. From that point on, J.J. Abrams and company had me, and the flick rocketed toward a satisfying conclusion -- not just for this movie, but for the Skywalker saga as a whole.

I don't know what the detractors were expecting, but I really enjoyed The Rise of Skywalker, and approve of how things ended up. I think people think too much about Star Wars, and what they want from a Star Wars movie. I've loved this franchise since the beginning, and I still do. But it's just a series of movies, nothing more, nothing less. And as good, and even great, as most of them are, they're just movies.

The Rise of Skywalker is a great end to one of my favourite stories, and it pays its respects to the entries that came before it. I'm giving it a Good, and look forward to watching it again.