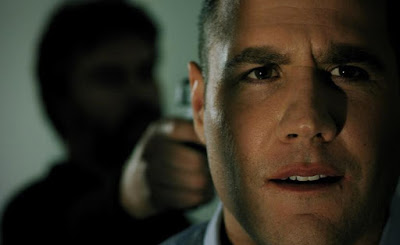 We have much love for John Fallon and Marc Natoli's action short The Proposal here in The Basement. It did in 12 minutes what many action movies fail to do in two hours -- kicked our asses!

The one question we were left with when the flick ended was "when do we get to see a feature-length version of this bad boy?" The answer is soon!

Mason Stone: The Proposal is currently in development, with Natoli back as gun for hire Mason Stone and Ben Whimpey returning to the director's chair. John Fallon, who wrote the short, will co-write the feature.

The Proposal has already proven a hit at festivals, winning Best Action Film in Philadelphia. Given Natoli's charisma and Fallon's sense of action, we're not surprised. A full-length film will do the same.

We'll provide more on Mason Stone: The Proposal as it develops, and wish everyone involved much success.