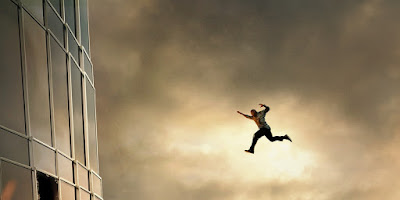 Then Jay posted his response yesterday.

Now, generally, Jay and I have the same tastes in movies.  We both agree that "Mulholland Drive" is crap, and that the 80's was a great time for action movies.

But we do disagree from time to time.  I enjoyed Kevin Costner's "The Postman", while it sends Jay into a slather, frothing rage where he'd chew through electrical wires to stop the movie from being shown.

But I respect Jay's right to have the occasional lapse in taste.

I have to disagree with Jay regarding putting "Skyscraper" in "The Bad".

Yes, the story is a little derivative of "Die Hard", but most things in the film world nowadays is.  But it's still a solid story that supplies a ample foundation for the characters and action.

The characters- at least the villains, are similar to those from "Die Hard", but they didn't need to be super deep in order to be interesting, or to be a suitable foil for the protagonist.  Will Sawyer (Dwayne Johnson) is a fun, interesting hero that you come to like and root for.  While I would've liked Sarah Sawyer (Neve Campbell) to have been fleshed out a bit more, she was still a good character- and a  nice strong, independent female one no less.

Dwayne Johnson and Neve Campbell are fantastic in this movie.  They bring a lot of energy and connection to their characters.  They make you want them to succeed and triumph over the bad guys.  Roland Møller as the terrorist Botha was great as well- almost on par with Alan Rickman in "Die Hard" in my opinion.

The action is seriously ridiculous and over the top- a sight to behold and enjoy.  There's a lot of (possibly Red Bull induced) kinetic energy in the stunts and camera work.  The stuff Dwayne Johnson does in some scenes- the crane scene in particular, is almost super heroic in nature.  Just a lot of exciting and fun stuff to watch.  An action fan's treat.