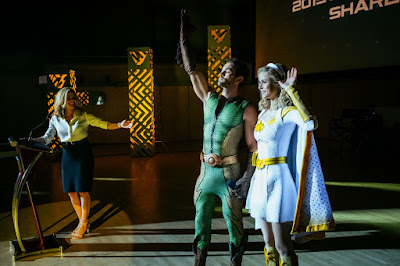 Amazon's new series The Boys is the perfect antidote for those who are tired of all these superhero movies and TV shows. It plays within the rules of the genre, while turning the tropes on their collective heads.

And it's about as un-politically correct as you can get, which makes it even better.

It should come as no surprise The Boys is based on a comic-book series of the same name, and was created Garth Ennis, the evil mastermind behind Preacher and some of the best runs on Judge Dredd and The Punisher. The man likes to push things as far as he can, good taste be damned, and I applaud him for that.

The TV series is a wonderful commentary, not only on our infatuation with comic-book characters, but with branding, social media, celebrity and pretty much everything else that's wrong with our world. It has a lot to say, but doesn't get weighed down with the message.

Things frequently get ugly -- and gruesomely violent -- but the show balances that with a sense of humour and some great characters portrayed by great actors. Karl Urban is always reliable, and seems to relish playing a British badass who believes all supers are bad. Anthony Starr also does good work as Homelander, a what-if-Superman-went-bad character.

My favourite is Erin Moriarity's Starlight. She plays the only morally good character on the show, and is tough and vulnerable at the same time. I dug her in Blood Father and Within, and I'm pretty sure The Boys is going to make her a star.

If you haven't caught The Boys yet, please do. At a tight eight episodes, it's the perfect binge in this post Stranger Things summer.