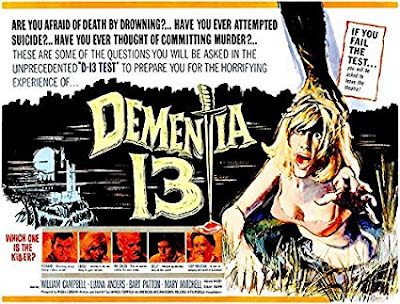 Mike S here with a Top Five List!  This time, I'm going to visit one of my favorite movies EVER- Francis Ford Coppola's debut, "Dementia 13".  What follows is a list of the five scenes that make this a great movie. 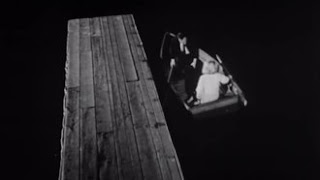 1.  The Dock Scene- John and Louise decide to go for a late night boat ride on lake, just before John suffers a fatal heart attack.  I love this scene because of the camera angle, and the contrast between the light colour of the performers (and the boat) and the surrounding water.

The way it smoothly switches to the animated opening credits is just a great, moody way to start a movie. 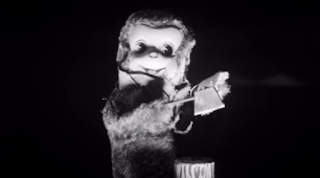 2.  The Playroom Scene-  As Louise connives to convince John's mother to leave everything to her, she comes across the abandoned playroom of the deceased daughter Kathleen.  Once again, the lighting in this scene is remarkable.  Coppola really used the black and white film medium to his full advantage in this movie.

Provides a great example of the "scary monkey toy" trope as well. 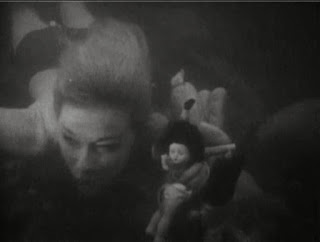 3.  The Late Night Swim Scene-  Louise has settled on a plan to convince her mother-in-law that the spirit of Kathleen wants her to leave John's inheritance to her.  This plan involves swimming in her panties late one night (it makes sense in context).

I really loved the look, and slightly claustrophobic camera work in this scene.

The reveal of the "thing" on the bottom of the lake was marvelous, and led into the first kill of the movie smoothly and skillfully. 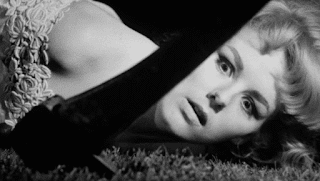 4.  The Axing the Bride Scene-  The family doctor has just discovered Louise's body, and suspects who the killer is.  As he sets his trap, the killer chases Richard's bride, and almost takes her head as a prize.  Seriously, the shot used here is a piece of artwork in my opinion.  In fact, I did use it as part of an art piece I did.
The contrast of shadows and light, the framing of the ax and the bride's face... just a fantastic piece of camera work. 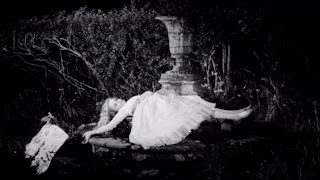 5.  The Climax-  We come to the end.  The final moments.  The secret of Castle Haloran has been uncovered.  The killer is known.  As Billy takes one final rage filled moment to take those around him down as well, he's shot and falls... whimpering, and begging Kathleen to forgive him for killing her.  A doll of Kathleen is all that's left of the madman's story...

This scene is just a well crafted end to this movie.  Suspense, action, and pathos weaved together like fine silk.

And there we have it.  Do you agree?  Disagree?  Let us know!