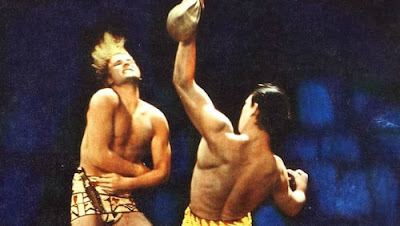 Movies can transport us to magical lands, take us on grand adventures, and witness feats of wonder.

But some movies can make us wish that we'd ridden on the Titanic instead...

Two brothers (one good, one bad) wind up stranded on a small island in the Pacific Ocean inhabited by only women.  The good brother falls in love (instantly) with one of the young natives, while the bad brother looks for a way escape before a naval boat rescues them.  Circumstances and greed bring the two brothers to a climatic battle, and oceanic justice...

This 1958 Roger Corman film is pretty bad- but I could see why he'd say it was most enjoyable one to make.

The story is pretty thin... thinner than the shark out by the titular Shark Reef.

The characters are pretty pasty in terms of writing... pastier than the shark out by the titular Shark Reef.

The camera work is pretty limp... limper than the shark out by the titular Shark Reef.

I would rather feed myself to the thin, pasty, limp shark out by the titular Shark Reef than watch this chum fest again.  "She Gods of Shark Reef" is going in "The Ugly".