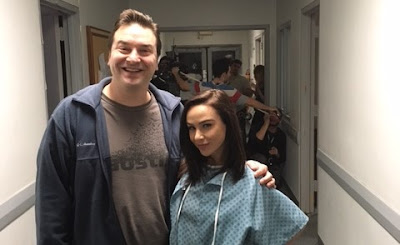 Just the other week Shawn and I reviewed the fun killer-doll flick Dolls, which starred Dee Wallace and is produced by genre veteran Jeff Miller (pictured above, with Danielle Harris). I was supposed to sit down with Jeff last week, but had to take a trip out of town.

He and I will record a discussion for the podcast in the near future, but in the meantime, here's an email interview we put together for your reading enjoyment:

How did you get involved with Dolls? Did you have a hand in putting the story together?

I think I talked to a distributor friend about partnering on a dolls movie.  Once I got the go-ahead to produce it, Justin Hawkins (with whom I'd written OUIJA HOUSE and another script) spitballed some ideas, along with Justin's brother, Josh.  They then wrote most of the first draft or so, but I also chipped in here and there as it went along.

A big part of the film's strength lies within the father/daughter relationship. How important was it to keep that the core of the story?
We wanted to do that early on, to give their relationship a depth you don't often see in these types of movies.  I agree that's one of the film's strengths.  I think many viewers will be able to relate to the dad or daughter.  Or the mom, haha, who kind of comes across as a villainess early on, but by the end I think you understand what it's like to be in her shoes too.
The dolls are used sparingly, and it great effect, throughout the film, almost like the shark in Jaws. Was that a conscious decision, or a budgetary one?
A little of both.  But we never intended the dolls to do much running or jumping around onscreen.  They're not Chucky.  I think it's scarier when you don't see them move, but they pop up somewhere other than where they're supposed to be!
Who designed the dolls? They are legitimately creepy creations!
Ryan Pilz, who did a fantastic job production designing OUIJA HOUSE and THE TOYBOX, designed and built the "leader" doll, Matthew.  The other two were existing dolls that we changed and tweaked to try to make different looking.  One was owned by fellow DOLLS producer Robert Michael Ryan.  He and director Cuyle Carvin had used it in their anthology series "Dark Corners."
How hard was it to get Dee Wallace on board? She's always a commanding presence, and a classic genre actor.
Dee is great.  I'd worked with her a year earlier on OUIJA HOUSE, and once we had this story outlined, I knew I wanted her for the character of Margaret.  We never really considered anyone else.  So we made an offer, and thankfully she said yes!
You got your start writing and producing horror flicks like Freakshow and Hellblock 13. What attracts you to the genre?
Horror has always fascinated me, ever since I was a little kid and watched THE LEGEND OF BOGGY CREEK on TV and got so scared I had to sleep in my parents' bed.  And later I would fast-forward VHS tapes through the scary parts and then go back and watch at regular speed once I knew when the killer would jump out.  Plus I just love the look of creepy houses, foggy nights, that sort of thing.  There's something mystical about it.
How hard is it to get a career going in film these days? And how have you successfully managed to keep making movies?
Independent filmmaking is hard and getting harder.  The cheapness -- and quality -- of digital cameras has made it so that almost anyone can make a film.  Even on your phone.  So there's a glut of product, which generally drives down prices.  But you know, even when I started in the '90s, it wasn't easy.  We shot on film, which was more expensive, and there weren't as many outlets for your movie.  If you didn't get into Blockbuster, you had a hard road ahead.  Now of course there's no Blockbuster.   The market changes, and unfortunately it doesn't seem for the better.  Not for these indie films, unless you have a real hook.  Fortunately I've been able to get a lot of movies done over the past few years, and a few of them had that "hook.'
What's next for Jeff Miller?
Western ONCE UPON A TIME IN DEADWOOD (starring Robert Bronzi and Michael Pare) comes out in October.  It's from the same star and director of DEATH KISS, the trailer of which kind of went mini-viral when it was released last year.  Gary Jones' action thriller ESCAPE FROM DEATH BLOCK 13 (also starring Bronzi, as well as Nicholas Turturro and Lawrence Hilton-Jacobs) is one I helped executive produce that should be out early next year.  Meanwhile, there are a couple of other action projects I'm trying to get jumpstarted.  And I'm sure I'll be doing another horror movie very soon!