Retro Review: Battle Beyond the Stars (1980) 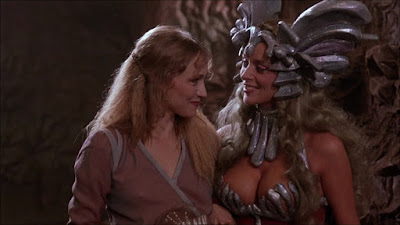 Leave it to Roger Corman to come up with a low-budget answer to Star Wars. And to have the stones to base it on classics like The Magnificent Seven and The Seven Samurai.

Battle Beyond the Stars is important for a few reasons. It was written by John Sayles, who went on to write such high-profile flicks like Eight Men Out, Passion Fish, and the TV series The Alienist. Oscar winning composer James Horner (Braveheart, Aliens, Avatar and many, many more) got his start here as well.

But the really big name is James Cameron. He did the special effects for Battle Beyond the Stars, and makes it look bigger than its scant budget. Legend has it, this film paved the way for him to make The Terminator.

And how is Battle Beyond the Stars as a moviegoing experience? It's OK. It's great watching veterans like George Peppard, Robert Vaughn, John Saxon, Darlene Fluegel and Richard Thomas do their thing. And Sybil Danning, in her first American role, is/was hotness in action. Rrowr!

But the movie feels flat, with little suspense or excitement generated. And it's not a lot of fun to watch. Most Retro Reviews, even the Bad ones, still have a spirit of fun to them. Most old movies do. But this one is just kinda meh.

So, pedigree aside, I'm giving Battle Beyond the Stars a Bad. And I'm done with it.