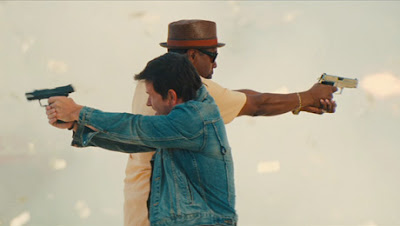 Allow me to quickly introduce myself: My name is Kara, and I live over at www.karaschatter.com . I have no experience in the movie industry, other than watching and appreciating them. I thought I would offer up my movie reviewing skills, or lack thereof, to The Basement to give readers a female perspective on movies, new, old, good, and bad.

I’m not sure what there isn’t to like about this movie; there’s great acting by a couple of Hollywood’s finest, gun-slingin’ action, drugs, money - How can it get any better? 2 Guns was a great movie for what it is. It doesn’t confuse you, there’s no twisty plot twists, just good ol’ fashion fun.

Denzel Washington plays an undercover DEA agent and Mark Wahlberg plays an undercover Navy SEAL. Neither of them have any idea but somehow join forces to rob a Mexican drug lord’s cash-stash at a bank. Shit hits the fan and well, they stick together to figure what the F is going on.

Before the movie came out there was some talk that Wahlberg couldn’t stand up to Washington’s swagger, that he looked silly compared to him. But who can? Denzel is the king of swagger, and I think that Wahlberg approached his role as a kind of cocky good ol’ boy accordingly. I saw glimpses of his character in Four Brothers as well as Shooter in his 2 Guns character, and personally, I thought it worked well for him.

I also must mention that James Marsden playing one of the several bad guys was refreshing. I was so used to seeing his luscious locks as happy, cheerful, good guys that I didn’t even recognize him at first, but he managed to pull it off.

2 Guns opens this past Friday in theatres and I definitely recommend it to anyone who just wants to sit down and watch an action movie for what it is - no frills, shoot en' up fun. I give it a Good!