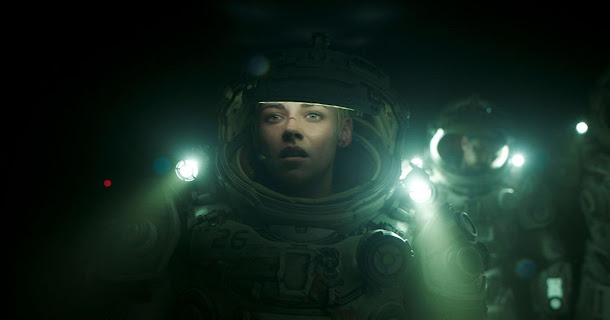 Surprise, surprise. I was in the mood for something semi-Lovercraft again, so I decided to take a look at 2020's Underwater. While flawed in many ways, it certainly deserves that title.

If there's one thing this movie does well, its make you realize how dangerous the deep ocean is. All monsters aside, the characters are constantly threatened by depressurization, and the whole ocean crumpling their base to tin foil. The setting plays a key role in the crew's survival, which is exactly what you want from a movie called Underwater.

However, the setting and atmosphere are where my praises end for this film, as I found the rest pretty tiring. The worst element has to be the highly unqualified and shallow characters we're stuck with. Ninety percent of the problems and deaths in this movie come from these people making poorly thought out and rash decisions.

Sure, the characters are under some pressure as everything around them leaks, but it's a bit much at times. Also, the characters don't actually have much in the way of... well... character! They're written with ankle-deep characterization, and are more or less the typical watered-down horror stereotypes. all puns intended.

This movie was expecting the deep-ocean atmosphere and monsters to carry most of the weight, and they do not. The monsters are kinda cool, the diving suits are kinda cool, but that's pretty much it. Watch it if you want, but don't be surprised if your memory of this movie washes away soon after. Underwater is a Bad.