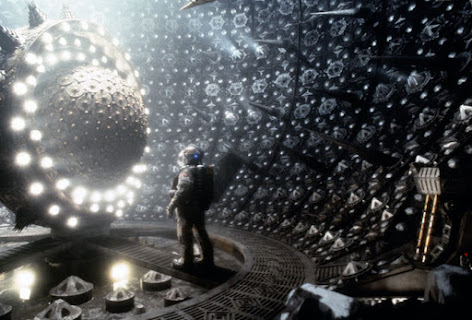 When I first watched Event Horizon, I thought it was one of the creepiest things I'd ever seen.

I can remember going home, and having to walk down the long, dark hallway to my bedroom. The gruesome -- and at times disturbing -- images the film burned into my brain made that walk one of the longest of my life.

Flash forward 23 years (yup, it's been that long already) and director Paul W.S. Anderson's flick has been diminished by time, and many, many messed up horror movies since. But it's still a strong entry in the sci-fi/horror genre, which is one of my faves.

For one, the set design remains striking, and contributes to the imposing nature of the film. Ditto Adrian Biddle's cinematography. This movie just looks creepy, and Anderson and editor Martin Hunter cut and pace it in such a way the viewer isn't given time to breathe. There are moments when it feels like they're hitting us over the head with sticks, as opposed to scaring us, but it works.

So Event Horizon might not be as scary as it once was, but a talented cast and crew keep this deep-space shocker afloat. It's still a Good in my books.