Shawn Gets Sucked in the SHARKNADO 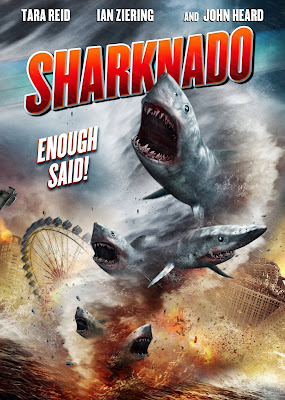 Hey Basementites. (I love that there is "tit" in that word, unlike in Sharknado)

I got sucked in the swirling vortex of sharks, after hearing from many people that it wasn't awful. You know us, in The Basement, willing to try almost anything.

We are semi-fans of Asylum's projects, knowing we aren't going to get Academy Award winning eye candy. And frankly, even "those" are over rated and stupid. Sometimes.

Anthony Michael Bosa (Basement regular) usually heads up the Asylum patrol, as he is willing to go elbow deep into their pool. Heck, even I have said, "One day, these folks at Asylum, are gonna hit a winner.

Today, I discovered that, Asylum can go fuck goats. To have been graced by some named "has beens", like: Ian Ziering, Tara Reid and John Heard,  to name a few, Asylum should feel honored. Yet they put these guys (and lady) on screen with crayon effects, terrible screen continuity and I could go on and on...Lazy film making...Show SOME respect to both the veteran actors and veteran movie goers.

Maybe I'm being pretentious and should go hang out with movie reviewer "elites"...but wait, are there any left????

Holy Christ, this is one UGLY motherfucker. The deadly flying letters, of the "HOLLYWOOD" sign, clearly missed their mark. Either the dude that turned this cool idea into grossness, or me, for having to see it.