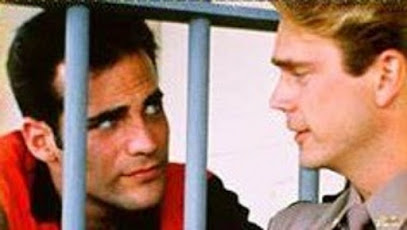 We are back on the highway again, keeping the flashing lights of Smokey's car in the rearview mirror, and adventure on the horizon as we bring you the fifth installment of the "Smokey and the Bandit" franchise.

An imposter has stolen Bandit's rig and a prototype car he was hired to deliver.  Using everything at his disposal, he has to chase down this rogue and get the car back.

All, while avoiding "Smokey"...

"Bandit: Bandit, Bandit" is the second made for TV movie in the franchise.  You can tell that the TV movies were meant to be a TV series, as the opening credits look exactly like the one from "Bandit: Bandit Goes Country", and looks very TV series-ish.

I mentioned in my review of "Bandit: Bandit Goes Country" that it had a weird "90210"/"Dukes of Hazzard" vibe to it.  Well... imagine my surprise and amusement when "Smokey" (in the form of Sheriff Enright) is revealed to be played by John Schneider.

I have to say that I certainly appreciated the irony of one of the most iconic "outlaws" of TV now wearing a Sheriff's uniform.

I was actually surprised by this TV movie.  It had a fun atmosphere, and charm that did bring to mind the fun and wit of the original movie.  The comedy was a bit more understated than the movie- but lighthearted spirit of it was absolutely there.

The acting in this movie was improved from the previous one.  I quite enjoyed Brian Bloom in the role of Bandit.  I also enjoyed Brian Krause as Bandit's friend/partner in crime, Lynn.  Schneider brought a wonderful arrogance to the Sheriff's role without overpowering the rest of the cast.

This installment of the "Smokey and the Bandit" franchise was a quick paced story with some nice little action sequences.  It's not a deep movie by any stretch of the highway.  It knows that it's job is to entertain and pass the time- and it does it quite well in my opinion.

If I'm ever in the mood for a bit of 1990's TV nostalgia, I think that I would actually consider putting this movie on for a re-watch.  I'm going to give it a "Good".