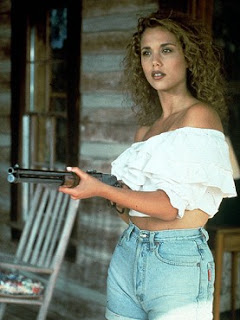 It's Tuesday, and the sound of the big rig horn, and revving of the Trans-Am pulls me out onto the highway into the sights of ol' Smokey once more...

Bandit is on his way to his hometown, when he winds up rescuing singer Mel Tillis from a situation, and agrees to get him to his next gig.  Soon, old loves and rivalries, old town traditions and feuds, a bootleg operation, and big wooden bear bring Bandit more trouble than old Smokey ever could...

There is a lot happening in the fourth installment of the "Smokey and the Bandit" franchise.  The multiple plot threads are distributed in a nice, quick pace without leaving your head spinning- and is even a little entertaining at times.  But it comes across as a bit of a weird "90210"/"Dukes of Hazzard" hybrid that didn't fully work out.

The character of "Bandit" isn't the one we all know and love... unless you decide in your head that this TV movie is actually a prequel of sorts.  Since he's younger.  Much younger.

The acting isn't bad, considering that it's a very 1990's type of made for TV comedy movie.

And I can't really believe I'm saying this.

But... this movie had a lighthearted charm to it that kind of took me back to what it was like to watch TV as a teenager.  While it's not something that would normally stand the test of time, I think it could've done well as a TV series back in the day.

Oh, and I enjoyed the way they played with the trope of "Bandit" picking up a woman on the roadside like he did in the first movie.  The little bait and switch they pulled later was a nice touch.

Would I watch it again?  Probably not- but if you're interested in a 1990's TV reboot/prequel for "Smokey and the Bandit", you could probably do worse than give it a look.  I'm giving it a "Bad".