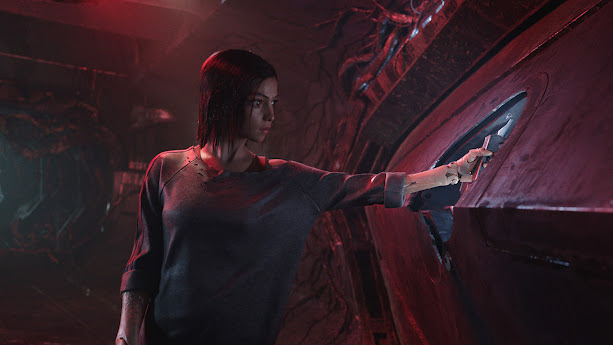 What does a crappy group project look like in movie form? One of the answers to this question could be Alita: Battle Angel.

It seemed obvious to me that some of the crew working on this movie tried quite hard to make a good one, while some did not. It's a shame to see such excellent CGI animation wasted on a pretty slap-dash writing/directing job. The animators and half the cast seem to be the only ones who took things seriously.

It doesn't help someone on the production just could not let Alita have normal-sized eyes. The only thing I don't like about the CGI is how hard they tried to recreate the Anime look with the main character. Her eyes never escaped the uncanny valley, and they completely overshadow the rest of the competent CGI.

What's also distracting is how inconsistent the acting is across the cast. Half of the actors are trying their best, while half were just there for a pay cheque. Christoph Waltz never stopped looking awkward while holding that prop hammer.

Also, let's not forget this is an adaptation of an Anime, and the script botched that too. It almost feels like they tried to condense a season's worth of the show into one movie. The pacing is very fast, and many of the emotional beats aren't given room to breath, or land properly.

While Alita isn't boring, it certainly leaves you wanting more. Maybe that was the goal; show us a mediocre movie that doesn't do the Anime justice, so we'll watch that instead? I'm not sure, but I do know this movie is a Bad.