Review: On the Trail of Hauntings Ep. 1 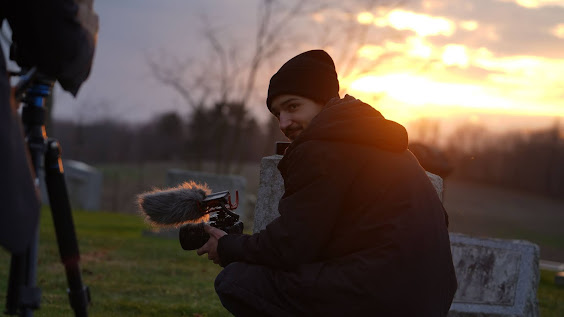 How does one review a show about ghost hunting? As someone who makes such a program, I believe I have a leg up on other critics in that regard.

Going in expecting a typical ghost hunting show would be a mistake. In that sense, this Small Town Monsters series, which is exclusive to their Small Town Monsters Squad on YouTube, is a breath of fresh air compared to what you'll see on History or the Travel Channel.

For one, the focus of this first episode is as much -- if not more so -- on the story behind the hauntings as it is on the investigation, which is a cemetery that's allegedly haunted by a witch. And the Small Town Monsters team is very much in front of the camera as opposed to behind it, providing a good opportunity to get to know the crew after a half decade of watching their films and TV shows.

This is a pretty raw show, which I enjoyed. Those who groove on the Hollywoodized paranormal shows will be disappointed. There's little in the way of mood music, and nary a jump scare to be found. Given that's my approach to this field, I really enjoyed it. I also appreciated the team taking the time to explain away the reported phenomena, instead of taking it all at face value.

You see, that's how it actually works during a paranormal investigation. Good on the STM crew for going that route.

This isn't as polished as other Small Town Monsters productions, which took some getting used. But that didn't get in the way of my enjoyment of it. I liked the first episode, and look forward to subsequent instalments. It's a Good, especially if you're tired of all those other ghost hunting shows.