January 21, 2021
We in The Basement eagerly await Jennifer Linch's feature directorial debut Kung Fu Ghost for a number of reasons.

1) Jennifer is a super awesome and talented gal, 2) Kung Fu Ghost is a supernatural martial arts fantasy comedy, and the world needs more of those, and 3) see one and two.

We've scored our first look at the film via Jennifer's Nameless Studios, and if the whole movie is as fun as these few minutes, we're in for a good time. Also, Jennifer knows how to fight!! We never doubted her abilities, but this quick scene is a fine display of her fist, feet, and blade skills.

We had Jennifer on the show in late 2019, and again last year, to discuss Kung Fu Ghost. No word yet on a release date, but we'll keep you posted.

Kung Fu Ghost is about Daisy (Jennifer) who inherits a spooky old estate in America from her grandfather (David S. Dawson), a martial arts master she's never met. She arrives in the U.S. and is shown the property. She soon discovers the house is haunted by her grandfather's spirit, as well as the ghost of a mysterious man named William (Noah Sargent). 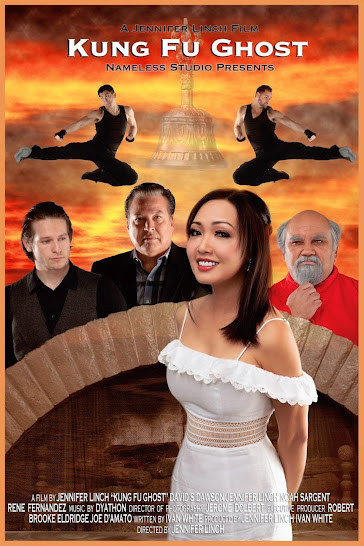