The Book Nook: "Day of the Minotaur" (Thomas Burnett Swann) 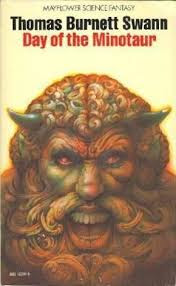 I have a love of mythology from around the word- and stories that deal with the mythological beings in them.  This week, let me take you back to the time of Ancient Greece... a time of the Minotaur...

Thea watched their torch-bearing captors recede into the distance and leave them to the cave's darkness.  Her brother Icarus whispered, "Forgive me- I wanted to come to the Country of the Beasts, not to the Cave of the Minotaur."

Then they heard a padding of feet (or hooves?), and the curdling bellow of an enraged monster.  It was the-bull-that-walks-like-a-man, a hybrid of man and beast, monstrous to the eyes, and roaring with cold malevolance.

Thea began to feel her way along the walls; their dampness oozed like blood between her fingers.  She rounded a turn and looked up into the eyes of the Minotaur, and his red, matted hair...

We all know about the Minotaur, right?  The man-beast that lived in a maze and craved the flesh of men?  Well, "Day of the Minotaur" explores that myth in a different way.  Thomas Burnett Swann tells a fantasy asking- what if the Minotaur hadn't been the unthinking, rampaging beast of the classic myths?  What if he was a thinking, feeling creature instead?

This premise is the skeleton upon with the meaty flesh of the story rests.  And it supports that weight quite well.  As a lover of mythology, I was fascinated by this take on one of them.  It creates a great feel for the age and settings.  The language used is fairly formal- but effective in it's mission.  It's only about 142 pages, so is a relatively quick read.  While reading it though, I didn't notice any time moving- and read it from start to finish in one sitting.  A very compelling and engaging story over all.

If you can get over the very formal style of speech from the characters, you'll find yourself getting emotionally engaged with the feelings and actions of Thea, Icarus, and Eunostos- the Minotaur.  They are all very interesting, relatable, and unique individuals that contribute drama, and romance to the story.

For a story that was first published in 1966, I'd say that I found it to be utterly fascinating to read, and if you're a fan of fantasy novels- or a fan of mythology, you might find it equally enjoyable.  A Good.