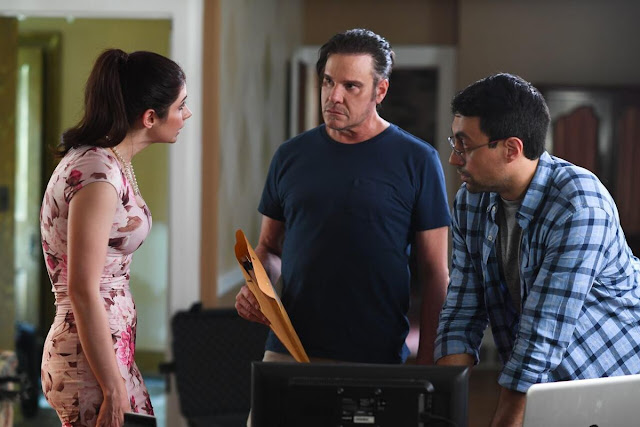 OK, let's face it; we all like a good haunted house flick. There's something comforting in watching a genre where you know what you're getting going in and, as long as the movie delivers, you're happy.

Widow's Point, the latest from writer/director Greg Lamberson, is very much a classic haunted house movie. You've got a great setting -- in this case a lighthouse -- with a grisly past, and more spirits than you can shake a stick at. And it's all handled in a fairly restrained and respectable manner, with an emphasis placed on genuine chills over jump scares and gore.

And the film is headlined by Craig Sheffer, who I haven't seen in a movie for a long, long time. And he owns this one with a great performance, slowly descending into insanity as the film carries on. Jack Nicholson could've learned a thing or two from Sheffer's work here had this film come out before The Shining.

Sheffer plays a down-on-his-luck writer who decides to make a comeback by chronicling an alleged haunted lighthouse where several deaths occurred. As part of a publicity stunt, he locks himself inside said lighthouse for a weekend, and encounters a deadly supernatural force.

Lots of potential here and, like I said, Lamberson handles it all with a retrained hand. He wants to make a classy ghost story, and he comes close to succeeding several times, especially during flashbacks where we learn the lighthouse's tragic history. This, and Sheffer's performance, save the movie.

The rest is too familiar, and hindered by some truly uneven performances. And, although I like where Widow's Point goes at the end, Lamberson doesn't have the budget to pull it off, which sucks.

Still, he tried hard, and there's stuff to enjoy here. So I'm gonna give it a Bad. The watch was decent, but I won't be seeing Widow's Point again.