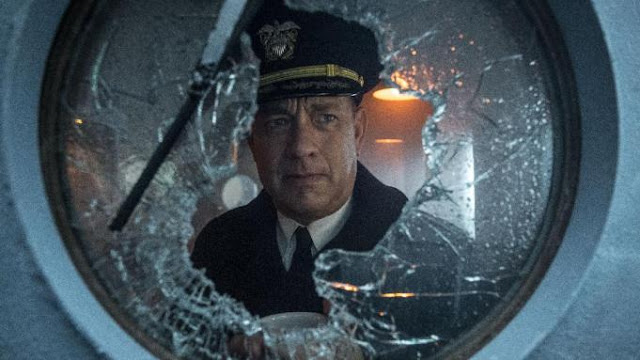 Some mainstream critics have complained Greyhound is too steeped in naval-combat tactics and lacking in depth of character and story, which is funny, as that's the whole point of Tom Hanks's new World War 2 movie.

This is a slice of military history; a film that attempts to capture the harsh, and often frightening, reality Allied convoys faced as they crossed the Atlantic, knowing Axis U-boats lurked beneath them and could strike at any time.

Greyhound is based on the 1955 novel The Good Shepherd, and details an inexperienced captain's first wartime mission guiding troop transports to Europe. They ended up relentlessly hunted by four U-boats, which resulted in one of the longest, largest, and most complex naval battles in history.

I love military history, especially World War 2, so Greyhound is right up my alley. I don't often get caught up in tactics and lingo, but so much of Greyhound relies on just that for its authenticity, that I didn't mind this time around.

It helps that Hanks, who wrote the script, and director Aaron Schneider have crafted a film that is as relentless as the U-boats in it. Once this movie gets going, it doesn't stop. The tension builds with each passing moment, and I spent most of the running time on the edge of my seat. Not since Mad Max: Fury Road have I been so caught up in a movie!

Hanks is brilliant as always. He's backed up by a strong supporting cast, some of whom I recognized. But I quickly forgot they were actors -- including Hanks. I felt like I was watching history unfold in front of me. 'Nuff said.

Greyhound is an absorbing, intense, and highly entertaining movie. I would love to have seen it on the big screen, but I'm stoked I got to watch it. It's a Good, and worth getting Apple TV Plus for a month.