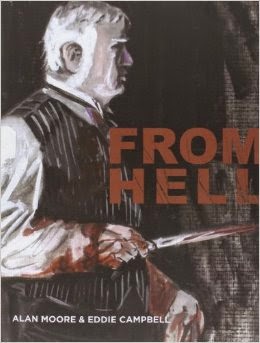 In my spare time, I enjoy collecting comics.  Fortunately, for you- there are quite a few horror comics out there...

During the late 19th century, a vicious killer by the name of Jack the Ripper stalked the alleys of Whitechaple- bringing death, fear, and an undying legend to the annals of history.

This is his story...

Alan Moore is known in the comic world for amazing stories:  "Watchmen", "V for Vendetta", and "The League of Extraordinary Gentlemen".  He continues that trend with "From Hell".  The story is interesting, engaging, and flows smoothly, while presenting us with a unique look at the legend of Jack the Ripper.  The characters are well crafted, and fascinating.  There are numerous historical references made that add depth and texture to the plot. 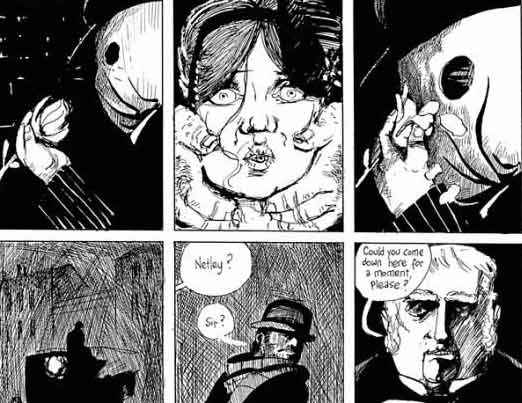 The art is great.  It plays nicely with shadows and textures to create a very suspenseful mood.  The sketchy nature of the drawings reflects the dirty, dingy atmosphere of the period.

The arrangement of panels is fairly uniform through the book, with just enough variation to engage the eye, and draw it from one frame to the next.  This is helped by just how much visual detail can be found in many of the panels.

I also liked the way text was shown in the speech balloons.  It added a final piece of texture to the artwork.

If there was one flaw to be found with "From Hell," I would have to say that it's the amount of exposition, and the style of speech used.  If you're going to read this book, you're going to have to slog through ALOT of dialogue spoken in Victorian era English.  Casual graphic novel readers will more likely than not get bored with how much dialogue there is.

As a person who has an interest in Jack the Ripper, I found this book to be quite interesting.  It presented a great story via wonderful artwork.  But due to the rather dialogue heavy nature of it, I wouldn't recommend it to everyone.  Because of that, I'm going to have to put "From Hell" into The Bad.