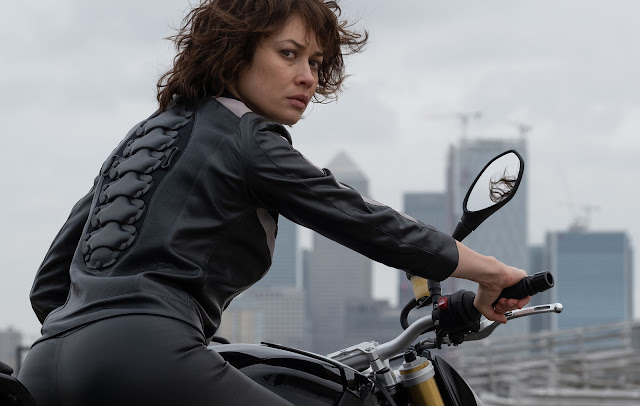 OK, I know you're not supposed to talk like this given our political climate, but I don't care. My sexual orientation is as straight as an arrow (not ashamed to admit it), I'm attracted to strong, independent women, and I admire the female form very much.

So I was drawn to the new(ish) action movie The Courier because it stars former Bond girl Olga Kurylenko, who is not only one of the most beautiful women on the planet, but one of the few women on screen who I legitimately believe could kick anyone's ass. It's the way she carries herself, the raw confidence she has. I've seen her throw down in a few films, and I believe it.

And yes, on The Courier's poster she's dressed in form fitting biker leather. I noticed that too.

So right away, I'm hooked. Then I read Gary Oldman -- arguably one of the best actors of all time -- plays the main villain. Sold!

The Courier is a cheesy, B-grade action movie. But it's one of the best cheesy, B-grade action movies I've seen in a long, long time. It's essentially Die Hard in a parking garage, with Kurylenko playing a Steven Seagal like hero caught between corrupt cops and a snitch who can bring down a major crime lord. She even says "I'm just the courier" more than once, harkening back to Seagal's famous "I'm just the cook" line from Under Siege.

Trust me, she's not just a courier.

Kurylenko kills the bad guys one and two at a time in a series of escalating -- and amusing -- action scenes. The film's small in scale, but big on violent action and fight scenes that are well staged, and had me laugh with glee more than once. Kurylenko dishes as well as she receives, and trained hard to be as convincing as hell here. Respect.

Oldman probably shot all of his scenes in a day or two, but he does what he does, and gets the job done.

I enjoyed The Courier. A lot. It's not a classic. It's certainly not art. But it's well made, moves fast, features a hero I'd like to see more of, and delivers its share of bone-jarring action. Gimme The Courier 2 already. This is Good stuff.