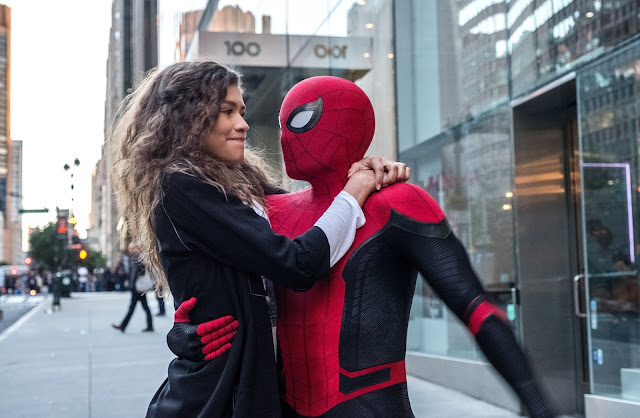 Today is a bit of a sad day because it's the last installment of "Into the MCU".  It's been a heck of ride, and I can't think of a better way to end it than with a movie about one of my favorite superheroes- Spider:Man...

Thanos has been defeated.  The universe has been saved... but Tony Stark is gone.

Peter Parker, still dealing with the grief of losing his mentor decides he wants to take a break from super heroics by taking a school field trip of Europe.  But his plans are soon hijacked by events beyond his control...

"Spider-Man: Far From Home" is a nice little "epilogue" to the whole "Infinity Saga", as it deals with the loss of Tony Stark, and it's affect on Peter Parker.  It is a wonderful blend of action, humour, and drama.  To be honest, it is one of the few movies that rings true as a Spider-Man movie.  The story moves at a quick, smooth pace, and is pretty coherent and tight.  There are a couple of sub-plots, but they don't detract from the main plot- in fact, they enhance and add some nice texture and depth to it.

The characters are developed nicely- adding more depth, colour, and nuance to the core ones introduced into "Spider-Man: Homecoming".  They're all enjoyable- including the supporting characters, without distracting from Peter Parker.  Even the villain is enjoyable to watch.  I found them all to be well balanced.

The cast was great- bringing their characters to life in a vibrant, engaging way that helped to make the time just disappear as you watched them traipse across the screen.  From supporting character to protagonist, to antagonist, the performers nailed it.  Tom Holland as Peter Parker, and Jake Gyllenhall as Mysterio worked great together.  All of their scenes had chemistry and depth to them.  They had a wonderful dynamic that echoed in some ways the one that Peter and Tony Stark had.

Special note regarding Zendaya as MJ, and Jacob Batalon as Ned as they were a joy to watch.  In "Homecoming", I was glad to see they hadn't gone with the standard version of MJ- and was interested to see how they would develop her in this movie.  I was not disappointed.  They added to the foundation they laid in "Homecoming", by highlighting more of her wit and intelligence.  They scenes with her and Holland had some great chemistry as well.  I also loved seeing Ned get some nice character development in his sub-plot.  It provided some of the best pieces of humour in the movie in my opinion.  I'm absolutely looking forward to seeing these two get more story-time in future movies.

As usual for an MCU movie, the visuals are just amazing.  Of note specifically are two scenes.  The scene where Peter is caught in Mysterio's illusion world, and the climatic end battle scene.  The first is both exciting and intense, and the second is just plain awesome.  I love how- unlike MOST of the MCU movies, the visuals aren't really the biggest draw.  They're amazing, but don't overpower the movie's story and themes.

Closing out this journey into the MCU, I have to say that "Spider-Man: Far From Home" is probably one of my favorite movies in the franchise.  I firm, solid "Good".