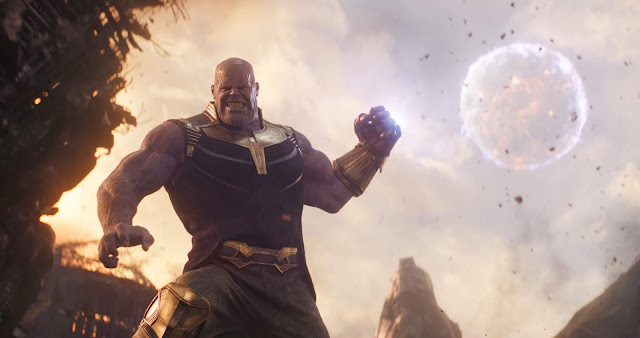 Thanos is coming.  He hungers for the Infinity Stones.

With them, he can bring "balance" to the universe... and it's up to The Avengers to stop him...

This movie is essentially one battle scene after the other, with bits of story within it.  There are a lot of story threads to follow- possibly too many.  To be honest, I don't remember too many of them- though I do have say that Thor's story line was my favorite.  It was exciting and emotional, and fun, and intense.

The characters are great... but are unfortunately diluted due to how much they're trying to pack into this movie.  Once again, the ones that stood out for me were those taking part in Thor's character arc- Thor, Loki, Hulk/Banner, Groot, Rocket.  The others... once again- I don't remember much of the others.  This is a shame since the other characters are generally just as enjoyable.

Where this movie shines really, is the spectacle.  All of the action sequences are amazingly well designed and performed.  The visual effects are amazing.  The "dusting" was emotionally striking and had impact- especially Peter Parker's scene.

But, there's just soooooo much crammed it.  It's hard to fully describe and remember everything.  I ended up feeling drained.  Not so much emotionally, but intellectually.  There really was just too much to process at once.  You'll have to watch it a couple of times to fully comprehend everything... but doing so might feel like a bit of a chore- so I'm going to have to give "Avengers: Infinity War" a "Bad".