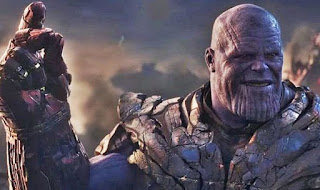 Here it is: the climax of our journey into the MCU.  The movie that 11 years of movies had been leading up to... "Avengers: Endgame"!

Thanos has won.  The Avengers have been defeated, and half the universe has been wiped from existance.

But wait... the random reappearance of Ant-Man offers a glimmer of hope.  Can the Avengers reverse the damage, and ultimately save the Universe from the Mad Titan?

"Avengers: Endgame" is, in my opinion much more tightly written than "Avengers: Infinity War" in my opinion.  This is helped by having a pretty clear format for telling the sub-plots.  The start of the movie sets up the mood and setting of the "post-snap" world, and how the Avengers have been dealing with such a devastating loss before introducing the main plotline.  A nicely balanced story giving all of the remaining characters a chance to shine and have their moment.

I was especially pleased by the growth they allowed Black Widow by giving her more of a leadership role after the snap.  Thor's character growth was my favorite though, as it was so much more personal and emotional than the others in many ways.  The team-ups were great combos too.  Captain American and Iron-Man, Hawkeye and Black Widow, Thor and Rocket Racoon.  The central team up is Captain America and Iron-Man obviously, but for me it didn't resonate with me as much as the others.  I only wish that Black Widow and Hawkeye had been expanded on in previous movies more.

The visuals are at the top of their game in this movie as well- making the final confrontation truly a sight to see.

But, the spectacle wasn't as huge a part of this movie as it was in "Avengers: Infinity War".  It was saved until the end, and was all the more amazing because of it- the cherry on top of the emotional, character created cake that was the rest of the movie.  I would dine on this movie again, and if you haven't seen it- see it.  A "Good".