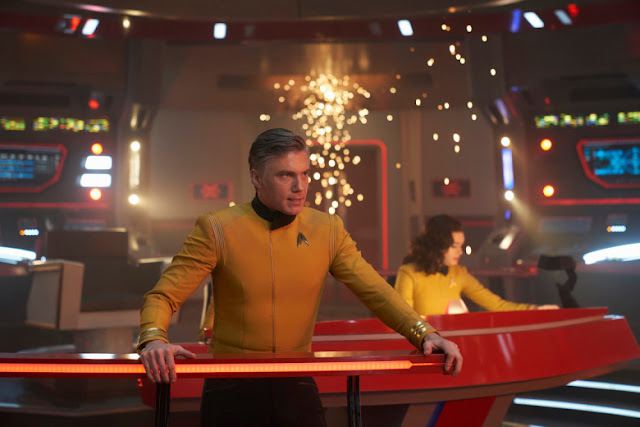 Last August, I sat down, watched, and reviewed Season One of "Star Trek: Discovery".  This past weekend, I sat down and watched Season Two...

It felt like I was hit by a photon torpedo.

The first season hinted at the potential behind the characters, ship, and premise.  It hinted at the possibility for emotional depth, dynamic action, and character driven humour- all while still sending forth a positive message about humanity's future.

Season Two followed up that potential with a plunge into the characters relationships to each other- and the very human emotions that roil and boil and simmer within.  It tossed us out of the airlock and straight into kinetic, frantic, and pulse racing fights for survival.  It brought laughter and tears to the eyes of this slightly jaded "Star Trek" geek.

I haven't felt this emotionally invested in a TV show in a long time.

And it felt wonderful.

I loved the growth of the characters and their stories.  Adding Captain Pike to the mix helped to ground the series more solidly into the "Star Trek" canon, and fleshed him out beautifully.  I lost myself in the way the camera moved through the action sequences, feeling my breath catch at the breakneck speed and energy behind them.  I laughed, snickered, and chortled at the quips, snarks, and quirks of the crew.

The story took the series in a fresh, and fascinating direction.  I can't wait to see what they do with the series in Season Three.  I couldn't help but find myself involved in the story and the characters journeys.  Under all the sci-fi, universe spanning threat, the stories were still very human at their core.

The acting really got ramped up this season- only helping to pull me into the series more and more.  I was no longer watching actors playing roles... I was watching the lives of these people play out before my eyes.

And holy shit, the visual style was balls to the wall fantastic.  The exterior of the USS Enterprise, the bridge of the self same ship, and new look of the TOS uniforms were gorgeous to me.  All of it was enhance by phenomenal camera work during the action scenes and the dramatic parts.  There was an energy to the movements that just rushed you along on the adrenaline of the moment, before gently gliding you through the soft emotional character moments.  Just a delight.

In short, I really enjoyed "Star Trek: Discovery" Season Two- and I'm looking forward to seeing Season Three!  A definite "Good" from me!