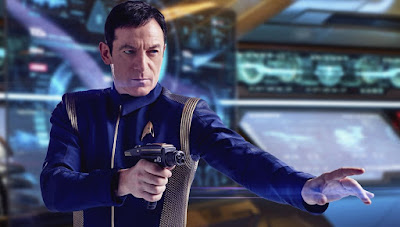 Jay can tell you that when it comes to Star Trek, I'm probably one of the biggest geeks he knows.  Probably more so than Shawn, actually...

So, it was with interest- and some trepidation that I sat down recently, and watch all of "Star Trek: Discovery" Season One on Blu-Ray.

There are things I enjoyed, and things I didn't enjoy about this show.

The idea of a series taking place just shortly before Kirk's tenure as Captain of the Enterprise intrigued me.  "Deep Space Nine" showed that a non-Enterprise based show could work (more so than "Voyager" did in my opinion)... but "Enterprise" cast some doubts in the viability of a prequel series.

"Discovery" starts off in a non-standard way- telling how Starfleet's first ever attempted mutiny occurs, and putting that mutineer in the role of the protagonist.  Then it introduces an experimental ship- even more experimental than Archer's Enterprise was, and ultimately takes you to a place you really did not expect.

I must confess that the idea of a universe wide "warp fungus" network that could be used to space travel was... weird.  Weird, but certainly interesting.  I wonder how much influence the idea of "string theory" played in the development of this concept.

Overall, the story actually kept me interested in seeing what the next development was going to be- which is a good thing.

The characters could be seen by many (myself included) as a hit or miss bag of people.  Some I liked, others were a little lackluster.  I liked Michael Burnham (Sonequa Martin-Green), especially since they weren't the Captain.  It was nice to see a series examine the relationship between a subordinate and their commander.  I also really liked Paul Stamets (Anthony Rapp) and Hugh Culber (Wilson Cruz) as an openly gay couple.  Their interactions brought a nice, organic sense that love is love- regardless of who you were.  I also enjoyed Gabriel Lorca (Jason Isaacs).  The character brought a neat sense of mystery and tension to the series.  Part of you saw his point of view... but part of you also wouldn't trust him to stand behind you with a phaser.  Loved it, and how it was a integral part of the first season's storyline.  I thought that Sylvia Tilly (Mary Wiseman), while the least developed, offered a lot of potential, and provided some great, entertaining moments- especially her interactions with Stamets and Burnham.

The only characters I was "meh" about were Saru (Doug Jones), Voq/Ash Tyler (Shazad Latif), and Philippa Georgiou (Michelle Yeoh).  I liked that a less human looking Federation race was playing a larger part as a character, but the character's general timidity initially left me less than impressed.  Fortunately, they were willing to develop the character a bit more of the course of the first season, I see some great potential for Saru in future seasons.  Voq/Ash Tyler left me squeamish because of his backstory: a Klingon that was grafted onto human bones, etc and mind wiped to become a sleeper agent.  Given that, you have to kinda view the more human looking Klingons during the original series in a slightly more gruesome light... how many humans did the Klingons capture and dismember to give them that appearance...

I can't say much about Georgiou as she's not in the series much- though I will say her Mirror Universe counterpart has a lot of promise.  I hope they follow up on it in later seasons.

The acting is pretty good for a TV series- with special mentions going to Anthony Rapp, Jason Isaacs, and Mary Wisemen.  As the season the developed, I kept watching mostly for those three performs.  Especially Anthony Rapp.  He just brought such a light, natural reality to his character.

Visually, there are some good and not so good things about the series.  I loved the uniforms.  They looked like a decent intermediate uniform between "Enterprise" flight suits, and the original series uniforms.  I also thought the sets were well designed.

The ship "Discovery" itself, when compared to the "Shenzou" looked extremely clunky- especially the way the nacelle supports looked.  I also have to question the practicality of the two ringed saucer... where one ring rotates before jumping to "fungus warp".  Just looked... weird.  Though I did liked the also slight odd visual of the ship flipping over in that second before it jumped.

The less said about the Klingons... the better I think.

Ultimately, I found "Star Trek: Discovery" Season One to be a pretty decent start to the series.  There were some rough elements that needed to be ironed out, but decent enough to take Star Trek into an interesting direction.  I'm giving it a "Good".