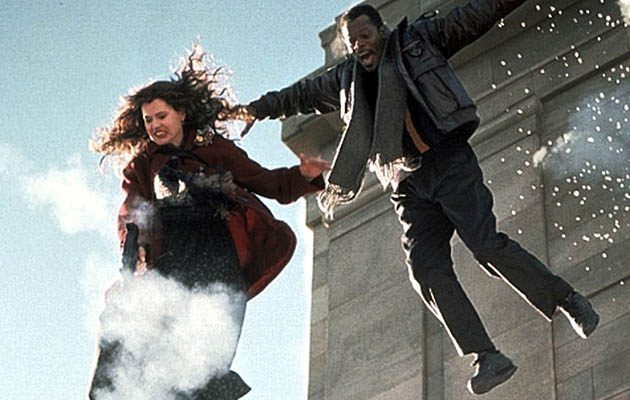 When you think of Christmas movies, The Long Kiss Goodnight isn't the first to pop into your head. It might not be the fifth or tenth. But it should be.

Hold on, you say? How can a violent action film be a Christmas movie? Shouldn't Christmas movies be confined to A Christmas Carol, It's a Wonderful Life, Miracle on 34th Street and crap like that?

The Long Kiss Goodnight isn't Shane Black's most well-known work, but the screenwriter's trademark banter, black comedy and skilled action writing are all on display. This is a fun, funny, and violent action picture about a woman with amnesia who finds out she's a former spy/assassin. And damn, it works so well.

Geena Davis owns the role, even if she isn't the first actress you'd peg as an action hero. She and Samuel L. Jackson play off each other so well. And there's great supporting work from Brian Cox, Craig Bierko and David Morse.

Director Renny Harlin really outdoes himself here. He was a big deal during the late 80s and early 90s, but this is his best work by far. The film is technically superior and filled with exciting set pieces. And yes, it all culminates in a Christmas Eve showdown at Niagara Falls.

So if you're looking for a little Christmas cheer this holiday season, please give The Long Kiss Goodnight a watch. I guarantee you won't be disappointed. It's a Good.