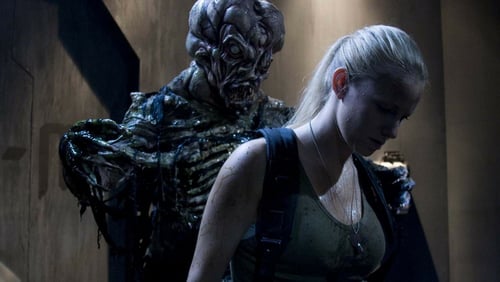 Last week I wrote about the 10th anniversary Blu-ray release of Plaguers by Wild Eye Releasing... and admitted I'd never heard of the movie. That left me feeling something akin to shame, as I love B-movies with all my heart.

So I rectified the situation immediately, and ordered the Blu-ray. It arrived this past weekend, and I sat down and watched it last night. Was it worth the money and time? Stick with me!

Plaguers looks and feels like a Roger Corman production from the 80s. The filmmaking, special effects, and sensibilities are firmly grounded in that era and style of moviemaking. Thing is, Plaguers came out in 2008, so I'm thinking writer/director Brad Sykes had little to no cash, and did what he could with what he had.

The result is a mash-up of Alien and Night of the Living Dead. So yeah, this is a space-zombie movie that looks like it was made on cardboard sets with first-time actors hot off a university production. Which is fine, as that's pretty much what I expect from a movie like this.

Plot? Right. There's a plot. Well, an alien contagion is released aboard a spaceship, turning the crew and a group of would-be hijackers into zombies. There you go. Happy?

Two things prevent Plaguers from being a total dud: the wonderful gore effects, which are plentiful, and a fine cast of hot women. Yup, I went there. Alexis Zibolis is our beautiful lead, and the hijackers are a group of gorgeous woman dressed like space-age candy stripers. So don't blame me for this paragraph, blame Sykes. He thought the whole thing up, and assembled the cast!

Oh, and Steve Railsback is in it, and essentially a Bishop clone from Aliens.

I own Plaguers, but I don't know how often I'll watch it. I dig the gore and ladies a lot, but the flick isn't quite so-bad-it's-good material. I'm giving it a Bad and moving on.