Review: Animal Among Us 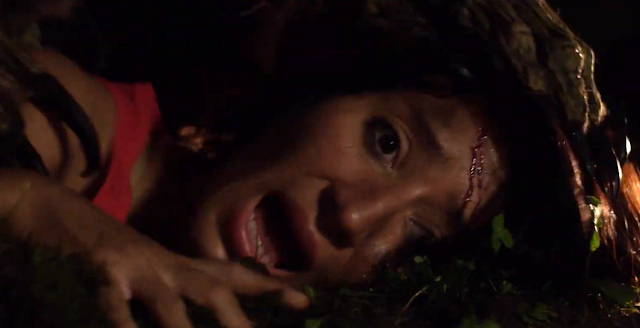 Sometimes familiarity can breed contempt. You've heard the same story over and over, and are tired of it. Sure, maybe there are slight variations, but the storytellers offer nothing new. Jason bored!

Then there's the story's that promise one thing, but delivers something different. A good move, right? But, if it's not done well, this can also leave one feeling contemptuous as we didn't get what we wanted.

We're a bunch of spoiled babies, really; rarely satisfied with what we're handed on a silver platter.

Fortunately, the filmmakers behind the new movie Animal Among Us were able to tease us with a familiar camp-set slasher story, but delivered something completely different in the end. And they pulled it off.

Famous for a savage murder 15 years ago, and the central setting for Roland Baumgarner's contentious best seller The MerryMaker Murderer, MerryMaker Camp is officially set to re-open... but something big is still lurking in those woods!

Sounds familiar doesn't it. Not a question, a statement. We've seen this movie countless times. But, and I will avoid spoilers here, writer Jonathan Murphy and director John Woodruff did something different with it. And they hired a good cast of actors -- including Christian Oliver, Larisa Oleynik, Don Frye and Christine Donlon -- to tell it.

We do get a low-budget horror movie, but it's well told and acted, with several twists and turns along the way. Yes, I wanted more blood and some boobs, dammit, but I still enjoyed the show and appreciated my Friday night watch. I don't get to say that all the time.

This is a Good, and I encourage horror fans to seek it out when Animal Among Us hits DVD and VOD on Nov. 19.