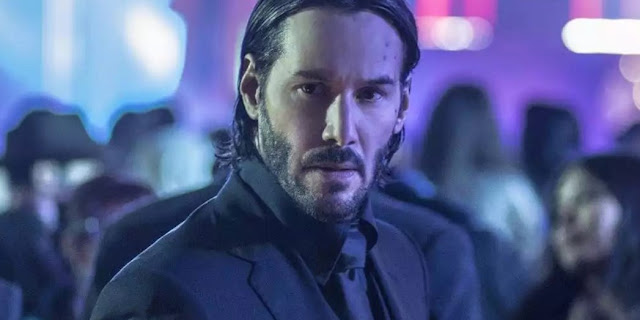 Holy shit balls!  2019's "John Wick: Chapter 3- Parabellum" grabs you by the scrote, and doesn't let go until you're singing the high notes!

I have to skip a synopsis, because there is no way I can sum up the plot of this movie, and do it any sort of fucking justice!  This is just an amazing addition to the John Wick franchise.  The story itself kicks into high gear right where the second one ended, and just adds so much more to everything involved.  The story is tight, fast, and deep at times- while adding a shitload of large and small details to the world John Wick inhabits, and bringing you characters that you will love, and respect- including the antagonists involved.  I loved the addition of the almost religious undertones added as a foundational glue to the assassin world and society.

Just a perfect example of world building in a movie franchise.  It keeps things fresh by expanding the world and the mythos behind it, without going overboard.  This is helped by how they treat it all as fairly mundane and normal.

All of the actors were astounding.  Of the returning cast, I want to give Lance Reddick a huge shout for showing us that the character of Charon isn't just the perfect professional gentleman, but also a super bad ass one as well.  Love that his character got a chance to really shine in this instalment.  As for the new additions, Halle Berry as Sofia blew me away.  She had wonderful on screen chemistry with Keanu Reeves- and the two dogs that served her character.  Berry really brought life and energy to her scenes, while just killing it during the action scenes.  Also of note is Mark Dacascos in the role of the shinobi Zero.  The balance of seriousness and humour he brought to the character really added to the movie, and made his scenes with Reeves really pop and sizzle.  He also really brought intensity to his fight scenes.

Speaking of the fight scene.  Fuck me three ways to Christmas!  Amazing!  Astounding!  Fucking awesome!  There are only a few ways to describe them.  They are spaced perfectly within the more dramatic, storytelling elements, and character moments.  My pulse and heart raced during them, because they are so intense, fast paced, exciting, and beautiful to watch.  The sequence that I refer to as the "Casablanca Carnival of Carnage" is my favorite one.  The way they choreographed the actions of the camera to blend the movements of the humans and dogs was just awe inspiring and visually stunning.  Seriously, just thinking about it makes me light headed and orgasmic!

"John Wick: Chapter 3- Parabellum" sits solidly in "The Good".  BUY IT, and which.  Fuck, BUY all three, and watch them all at once.  Once you're done, you'll be eager awaiting the next chapter!