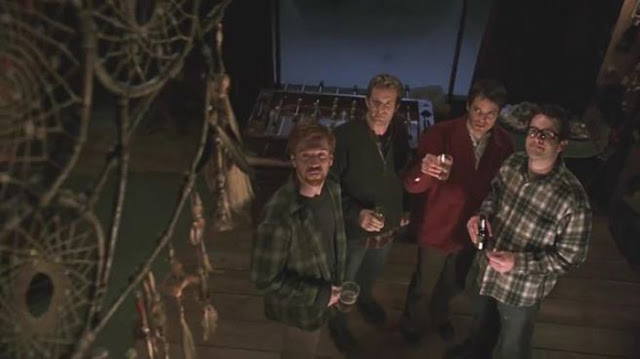 Not sure why, but I've been watching a lot of Stephen King movies lately. This includes the mess that is Dreamcatcher.

This movie seems unsure of what it is, and what its intent is. It feels like a Frankenstein's monster of Stand By Me, Slither, and The X-Files. None of these elements really gel, making you constantly question what you're watching.

What's most baffling are the main characters. Each is given a psychic power that's poorly defined, and mostly pointless. Plus the wooden performances make the characters feel even more alienating.

The next baffling aspect is the mystery, and how it's unveiled. The film starts slow and carefully builds suspense, but this doesn't last. The aliens are explained halfway through in one run-on sentence delivered by a bored Morgan Freeman.

From that point on there's nothing of interest left; now you're just watching the cookie crumble. Some weird stuff happens, but it's more laughable than entertaining. Apparently Stephen King wrote the book while high on Oxycontin. You can tell. You'll want to medicate too if you watch this, because it's an Ugly.