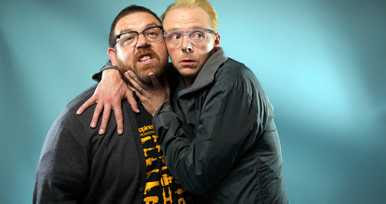 Shaun of the Dead and Hot Fuzz are two of my favourite genre comedies, and that's largely due to the pairing of comedy duo Simon Pegg and Nick Frost. Those two movies, along with their British series Spaced, cemented Pegg and Frost as a creative and comedic force to be reckoned with.

Now word has it Pegg and Frost are teaming up as creators and stars once again, this time for a new Amazon Prime series called Truth Seekers, and it sounds like something ripe for the two's usual antics.

Truth Seekers is a half-hour comedy series about a group of paranormal investigators. I'm just going to leave this right here, so you can ponder just how much cool and funny this has the potential to be.

No word yet on when Truth Seekers will start streaming. I assume they still have to shoot the damn thing. But we in The Basement are excited anyway, and look forward to catching the episodes when they appear.