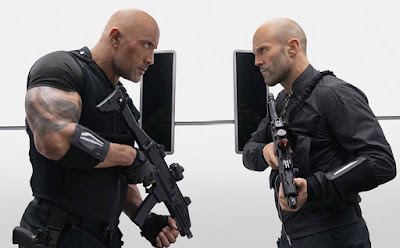 You gotta love a movie that knows what it is and embraces it. Fortunately, the Fast and the Furious spinoff Hobbs & Shaw is just such a movie.

Think a modern retelling of 80s action staple Tango & Cash cross bred with the Pierce Brosnan era of James Bond movies and infused with, well, the Fast and the Furious mindset, and that's pretty much Hobbs & Shaw.

Like I said, this movie is A-OK with that, so you better be too. Otherwise you'll be rolling your eyes at the macho banter, larger-than-life action scenes, and pure ridiculousness of it all. I was A-OK with it, so I had a lot of fun.

It doesn't hurt that Dwayne Johnson and Jason Statham look like they're having fun too. They are these characters, who first appeared in Fast Five and Furious 6 respectively, and have a natural chemistry. And Vanessa Kirby really owns her part as Shaw's sister, and steps up to her action-hero character and its demands.

As for the bad guy? Well, an action movie is only as good as its villain, no matter how much shit blows up (a lot of shit blows up here, by the way). Idris Elba IS a black Superman, and he's a great bad guy. So much so that I enjoyed watching him get his ass handed to him during the final fight.

So what's the take away? Hobbs & Shaw was made for 10-year-old boys and the 10-year-old boy in all of us. So embrace that little bastard and have a Good time at the movies.