Catching up with... Godzilla: King of the Monsters 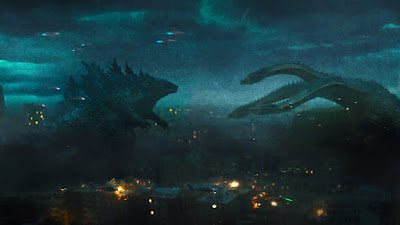 I bring shame to my family by admitting I didn't catch Godzilla: King of the Monsters during it's initial theatrical run back in May. But life happens, and this lifelong Godzilla fan failed to do so.

But I've bloody well seen it now, and I have much love for it!

Lamestream critics bashed Michael Doughtery's epic Godzilla movie for not putting human drama first, and instead focusing on monster-versus-monster action. I wonder what the fuck movie they were expecting?

As much as I enjoyed 2014's Godzilla, it had a little too much human drama for my liking. In fact, my chief complaint about Godzilla: King of the Monsters is there's still too many people in this movie. I yearn for the day when I get a Godzilla movie that's all monsters, and boring humans are nothing more than things to be stepped on.

I digress. This is a great Godzilla movie, with epic battles between the King of the Monsters and Monster Zero and Rodan. Plus there's Mothra here too, and many other beasts. City's get trampled, buildings fall, shit blows up. It's just awesome!

Things are nicely set up for Godzilla Vs. Kong, and I can't wait. Hopefully a lot of stupid humans get crushed in that one too!

This is a Good, and I'm happy.