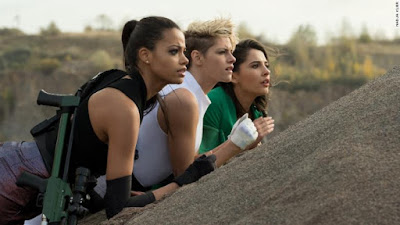 Because Hollywood is totally bankrupt of new ideas, and people have a very short attention span, there's a new Charlie's Angels movie headed our way in November. And it's not a sequel to McG's early 2000s stab at the franchise.

This time we get Kristen Stewart, Naomi Scott and Ella Balinska as the Angels, with Elizabeth Banks, Patrick Stewart and Djimon Hounsou as Bosley (Don't ask. I didn't). Banks is also the director on this one.

I'll let you see what this is all about before sounding off.

This looks like it has a similar blend of comedy and action as McG's Angles, and the TV series that inspired it. If I sound skeptical, it's not because I don't believe in the merit of a female-driven action franchise, because I do. It'd just be nice to see someone come up with an original concept, and not something that's been done before, and then done again.