Catching up with... Brightburn 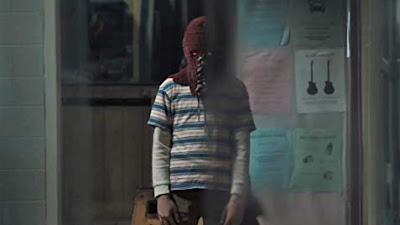 Catching up with... is a new feature here in The Basement where we catch up with the flicks we missed during their first run, but still want to sound off on.

Flicks like the James Gunn produced Brightburn, which Shawn and I were uber excited about, but didn't get to see when it hit theatres back in May. But we've watched it now, and man-o-dynamite are we ever glad we did!

This was the superhero movie we'd been waiting for, one that turns the story of Superman on its head, and asks "what if Clark Kent wasn't here to save us, but to take the world?" And it's a powerful question.

The answer is simple: we'd be fucked! And there's nothing his well-meaning parents, the school counsellor, or that pretty girl in class can do about it.

In short, the movie is exciting, suspenseful and full of edge-of-your-seat moments. My favourite is when the boy's dad decides he needs to kill his monstrous son... but of course he can't. Then he begs for his life. Spoiler alert, that doesn't work either.

Brightburn didn't catch on with audiences because it's pretty much the opposite of what people want to watch today. People want a feel good, uplifting story where the good guys win and want to save the world. This is the flip side of that, and that's what we in The Basement found so refreshing.

I wish Brightburn had made $800 million like Avengers: Endgame, then James Gunn and company could have made dark turns on Batman, Wonder Woman and The Flash, and eventually had them team up in a world-ending Injustice League movie. THAT is the kind of comic-book movie we want to see.

But we won't, and that's a shame, because Brightburn is a solid Good in our book.