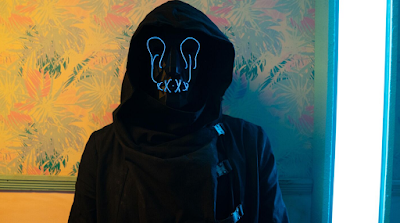 The first season of Slasher was a great bit of TV horror exploitation that didn't get the credit it deserved, with titles like American Horror Story and Channel Zero hogging the spotlight. But I dug it, and dug it a lot.

Season two was kinda a bore. There were some decent kills, but nothing like the first run of episodes. And everything moved so slowly, with boring and unlikable characters. I yawned a lot.

Now we've got a third season with another new storyline (yup, the cast remains the same, but each season is a new story with a new killer). Is the third time the charm? Let's find out.

Solstice is very much a return to form for the series. It's back to being a sex-and-guts exploitation show with three -- count 'em three -- gruesome murders in the first episode alone. Trust me, the pace doesn't slow from there. And yes, us man children get our share of hot chicks and boobies.

The showrunners attempt to tackle some big issues like racism, bigotry, gender issues and bullying. I don't usually like my horror served with social commentary, but it works here, and adds some depth. However, if you are in any way triggered by "gay stuff" I wouldn't tune in. Alt-right pussies.

This is a solid season of horror television, with some decent acting, several interconnected storylines, and yes, lots of slashing. That's what I came for, and I'm happy with the results. A Good from me.