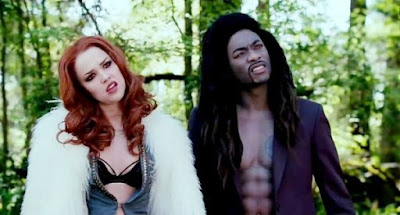 I can appreciate parodies... when they're done well...

Becca has moved to a new town.  Where she meets the mysterious Edward.  Hilarity ensues.

Oh... and there are vampires.

"Vampires Suck" is a parody of the "Twilight Saga", and actually has a fairly coherent story line that parallel's the original source material's fairly well.  It also manages to refrain from trying to cram in pop culture references to non-related franchises (unlike the "Scary Movie" franchise- and others of its ilk).

It's respect for the genre.  This film comes across as saying "Horror movies are stupid and witless, and we're going to make fun of it".  It's more insulting than anything.  I didn't sense any appreciation for the horror genre in this movie... just a lazy, low budget, juvenile contempt for it.

"Vampires Suck"... sucks.  It sucks in a toothless granny ghoul sort of way... not a sexy, shadowy creature of the night sort of way.

This movie is getting a stake through its heart, and buried in "The Ugly".