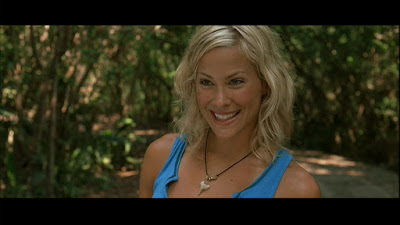 Vacations are supposed to be a time for relaxing, and enjoying a romp and maybe a frolic.

But sometimes, there's just that one shit wad that goes and ruins the fun...

Pleasure Island is an ideal resort for those wishing to get away for some drunken, less than inhibited fun.  At least it was... before the killings started.  Now, it's a prison that the Staff and guests have to escape before they're added to the growing number of bodies...

Broken Lizards, "Club Dread" is an enjoyable way to pass some time.  The story is a great starting point for the humor.  It's not deep, or thematic, or requiring any real thought in any sense of the word.

But that's perfectly okay, as it's still smart enough, and well written enough to keep me entertained during it's length.  It know what it's goal was, and it accomplished it well.

The characters were fun and interesting enough to watch as well.  They were likable, and each of them brought something to the story that made me want to keep watching.  They're slightly exaggerated caricatures of horror movie characters- but not so much as to be ridiculous or an insult to our intelligence.

I have a real hatred of movies that insult our intelligence... I'm looking at you "Mulholland Drive"...

The acting is fairly decent, with each performer bringing a sense of quirkiness, but likability to each character.  They had me chuckling throughout the entire film at their antics.

I would certainly recommend "Club Dread" to people for a viewing, and I would certainly watch it again in order to pass some time having a chortle and a snicker.  I'm putting it in "The Good".