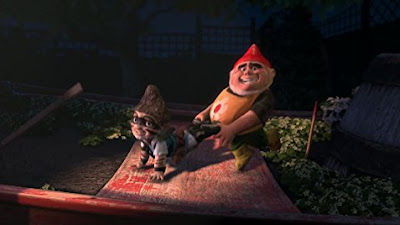 Once in each lifetime, there comes along an adaptation of a Shakespeare play that makes the themes and story relevant again.  It makes the old fresh and new again- offering an unexpected way to look at the timeless nature of such plays, and the characters within them.

And sometimes... it just provides a chance for a bad pun...

Two households, both alike in dignity- in fair Verona where we lay our scene...

Seriously, that's what it is.

And, to be honest- it doesn't do that bad of a job of it.  Not great, but not what I would call a shit show either.  It's a fresh, and more light hearted look at the classic Shakespeare play.  While I wouldn't say that it's a masterpiece... and Billy Shakespeare would probably go, "WTF?" I can't deny that it's entertaining.

Which is all it needs to be.

The characters aren't super deep or richly textured, but they're engaging enough that you can just let yourself go and relax as they frolic and romp across the screen.  This is helped by decent voice acting by James McAvoy (the same McAvoy that plays The Horde in "Split" and "Glass" no less), Emily Blunt, Michael Caine, Jason Statham, Maggie Smith, Patrick Stewart (as Willy S himself), and even Ozzy Osbourne and Dolly Parton (the juxtaposition of those two names just opened up a singularity in my brain...).

The animation isn't bad- not fantastic, but suitable for a film of this nature.

I was entertained.  I wanted to be entertained, and I was.  Is "Gnomeo & Juliet" for everyone?  No.  But  I would recommend it for parents of young kids who want some simple entertainment they can share with the rest of the family.  I'd even pull it out on those days I need a simple laugh and cheer-up.  I'm going to put it in "The Good".