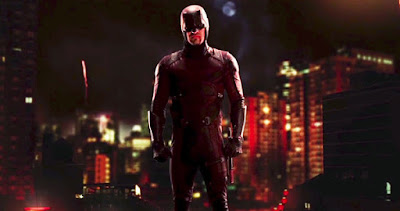 This will be a short and sweet, spoiler-free roundup of the first half (ish) of Marvel and Netflix's second season of Daredevil.

But seriously, I've read a lot of the reviews for the new season, and many consider it a cluttered disappointment. They do praise the action scenes, but wish Wilson Fisk was back, and say DD has been reduced to a supporting character in his own shown.

Makes me want to punch them in their collective pretentious balls!

Daredevil Season 2 is great stuff, building on the strengths of the equally solid first season while introducing key players in the character's cannon -- The Punisher and Elektra. Sure, the new additions get a lot of screen time -- although it takes several episodes for Elektra to turn up -- but these characters are important. Each should be given their due, and they are.

I've never been much for Jon Bernthal as an actor, but he's hands down the best adaptation of The Punisher yet. Maybe it's because of how unlikable he is in other roles, but he embodies Frank Castle. You sympathize with him without Castle being a sympathetic character. He's a killing machine with a sole purpose, and although his actions are (in a sense) justified, it's hard to completely condone what he's doing. It's one hell of a performance!

Ditto Elodie Yung as Elektra. She's sexy and mysterious, and her relationship with Matt Murdock/Daredevil is a direct translation of the dangerous, violence-prone passion that played out in the comics. Thank you!

Fight scenes? Daredevil continues to set the bar for what filmmakers can pull off on TV. Hell, the combat in Daredevil outdoes most feature films. It's fast paced and brutal, with a sequence at the end of the third episode that outshines the hallway fight in the first season.

I can't binge much TV, but I can binge the hell out of Daredevil. Looking forward to getting back at it tonight!

And yeah, this review wasn't that short. Sue me!