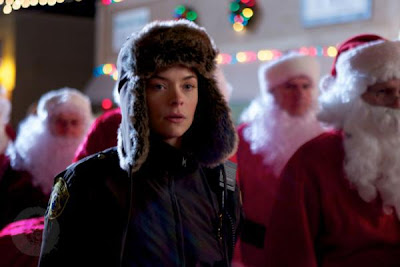 
Jason: Stephen C. Miller's seasonal slasher movie has everything I could have hoped for. Dismemberment, death by wood chipper, boobies, a bad attitude and a flamethrower murder or three. And it's sleazy as fuck. I dug the shit out of it!

It also highlights a very real, and often overlooked, cynical view of the holiday. Christmas isn't all roses and good cheer. There are a lot of people out there, like myself, who hate this holiday. And there are more than one or two who tend to go a little mad some times.

Enough philosophy. Jaime King is as good as ever in this. This woman sticks by her genre movies and she owned it here. But kudos as well to our Bad Santa. He said but two words, yet turned in a great performance as an iconic horror bad guy. This dude was bad to the ass, and creepy to boot. I dug him a lot. If I see him climbing down my chimney, I'm grabbing the family and running out the back.

I'm adding Silent Night to my seasonal watch list of anti-Christmas movies alongside Black Christmas and Die Hard. This is a Good.

Other than that gripe, it’s Good. Going on the shelf. 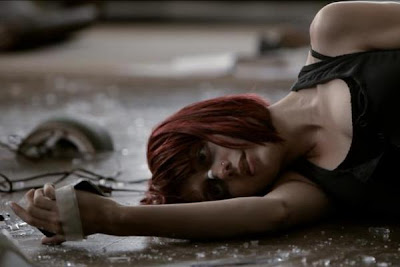 
Shawn: This is a movie that is likely taking place behind the façade of our reality. Truly. Groups exist with the power to unplug us. Hard Reboot.

Sadly, they don’t TRULY understand the consequences. Most computers don’t like to be “hard rebooted” and they are designed to take it. The human race will not handle a hard reboot. Where a “hacker” or believer thinks they are freeing man, they are wrong. Civilization has come to the point where the majority happily lives with all this tech, laziness and reliance on what we evolved to create.

Those people do not want to be “free” to eat by hunting, killing, and cooking their food over an open fire, that they had to create by chopping down a tree, by first shaving a stone into a sharp tool, with another tool, and tying to a big stick with woven rope from tall grasses. Guess what, motherfuckers, we’ve been there. The reason we are here isn’t some “governmental slavery" . . . it’s because we used our brains and evolved the intelligence to make our lives easier. Mostly so we can concentrate on bettering ourselves.

That is where the problem is. Greed. Unplugging the world isn’t going to solve greed. It is going to force it into a whole new level.

This movie did it’s job. Got me thinking, made me feel, and, for the most part, understand that we are doomed. This “movie” did in a few short minutes what a lot of feature length films strive to do in an hour and a half to three-hour length.


Jason: OK, this was a bit too heady for a Friday night watch over a whiskey or three. Writer/director Joe Kawasaki has a lot to say about the current state of the world. Are we all just mindless sheeple Tweeting, texting and Facebooking our way into oblivion?

Having watched this 39-minute short film, I believe Kawasaki thinks we are. And I'm inclined to agree with him. Although shows like ours do cater to all those social media needs. I'm a hypocrite. Sue me. But maybe someone does need to hit the reset button on our society.

From a Basement perspective, this is a talky film that is kept visually interesting thanks to Kawasaki and his talented crew. And I can't knock Emily Somers either. She is esthetically pleasing.

But did I like it? I enjoyed the single viewing for sure. I initially didn't think I'm that I'm a big enough computer geek to give it anything more than a Bad. But, as days passed and I started paying closer attention to social media, I agree with what the flick has to say enough to give it a Good.