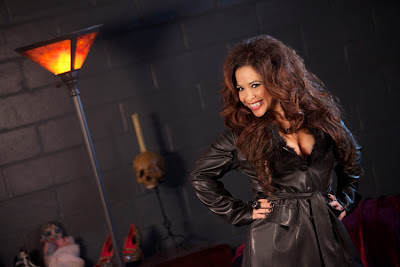 Regular listeners know there's much love in The Basement for our No. 1 scream queen, Brooke Lewis. Already a multiple-award winner, including for her role in Slime City Massacre, the lovely lady's work has once again been recognized . . . and we couldn't be happier for her.
Brooke's TV pilot and web series, Ms. Vampy's Tween Tawk, Teen Tawk & In Between Tawk, has won a Honolulu Film Awards Silver Lei Award For Comedy/Family/Talk Show!
"This is the most special project I've created! I want to inspire girls of all ages. I'm still a teenage girl at heart who deals with her own issues and insecurities and, if I can make a difference in the lives of tweens and tweens today, then I have done my job. VAMPT IT OUT!," Brooke said.
Brooke followed up her successful 2009 Ms. Vampy web series with this new inspirational series aimed at young girls, with discussions around body image, self-esteem, peer pressure, caring about what others think of you, being popular, facing your fears, following your dreams, boys and Twilight.
Oddly enough, Brooke encountered some resistance from Hollywood when she embarked on the project. Apparently they believed a vampire icon or character couldn't be a positive role model for teens. Brooke and The Basement say bullcrap to that!
"I feel that a win like this . . . confirms my creative convictions and instincts all along! I am proud to be an actress and producer in the horror genre and I know that Ms. Vampy can be a positive role model  to everyone!"
Congrats Brooke, and keep up the great work! You do The Basement proud!