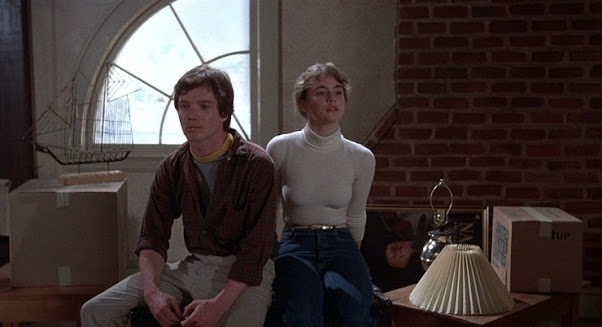 Revisiting Amityville II: The Possession was a bit of a shocking experience. It's a much-maligned sequel to a movie that isn't all that great in its own right. And it exploits a real-life tragedy in the name of exploitation entertainment. On the surface, I should hate it.

Scripted by Tommy Lee Wallace, and directed by Damiano Damiani, Amityville II is a very loose adaptation of Hans Holzer's Murder in Amityville. Hans Holzer is a well regarded author and paranormal investigator who investigated the actual Amityville Horror. His book, Murder in Amityville, was about the Defeo murders that occurred in 112 Ocean Avenue prior to the Lutz family moving in. This movie heavily alters the true story, changes the family name, and goes for pure Hollywood horror thrills and chills, baring little resemblance to the tragedy that really took place, other than the outcome.

As a movie inspired by a true story, or any kind of serious look into the paranormal, this flick is garbage. Granted, the whole Amityville story is garbage, so I guess that doesn't matter much, other than all involved are using a true horror story to make money. Not the first time Hollywood has done that, won't be the last.

As a straight-up horror flick, Amityville II: The Possession isn't bad. It's got the gore and special effects, although it's not even remotely scary. Actually, the most frightening part of this film is the family dynamic. The dad, played by Rocky's Burt Young, is an abusive bastard of the highest order, and there's an incestuous relationship between eldest daughter Patricia, played by Diane Franklin, and Sonny, who is essentially the Ronald Defeo Jr. stand-in (he's the guy who murdered his whole family inside the Amityville house and said demons made him do it). The sexual relationship between these two sure wouldn't fly on the big screen today, and it's uncomfortable to watch.

Amityville II: The Possession works as exploitation cinema, but you'll need a bath afterward. It's sleazy, but entertaining enough to warrant a Bad.