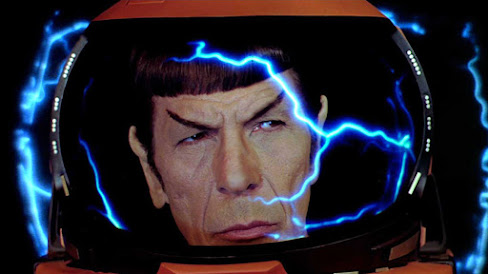 After a mysterious cloud absorbs a Klingon fleet, Starfleet sends it's best ship and crew in an attempt to stop it.  Will Kirk and the others be able to do what the Klingons could not?

Unlike the movie, this review is going to be fairly short.  "Star Trek: The Motion Picture" is a beautiful film- but a tad too long.  While watching it, I couldn't help but have some flashbacks to my time watching Stanley Kubrick's "2001: A Space Odyssey".

The look and feel was very much influenced by Kubrick's film, and the story is also quite lofty in nature- though a bit more character driven.  As gorgeous as the sequences showing the USS Enterprise for the first time... and leaving dock... and moving through the mysterious cloud were, they were unnecessarily long.  Much like the sequence of short scenes showing zero gravity in Kubrick's film.

The only thing missing was someone reading zero gravity toilet instructions...

The story is fairly cerebral and philosophical in nature, with little in the way of any real action.  In fact, the ship and crew are almost purely along for the ride up to the end, and put in a reactionary role until the final act.

The characters though, absolutely had hints of the ones we grew to love from the TV show... even Spock- though he was a bit more emotionless than during the show.

While "Star Trek: The Motion Picture" is a gorgeous film, it's long, and almost too Kubrickian in execution- without the action of the original TV series.  It's worth a watch, though, as part of a "Star Trek" marathon.  I'm beaming it into "The Bad".